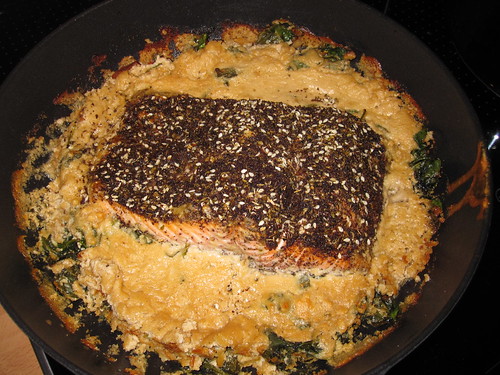 Once per week we aim to eat fish for dinner. Given that I don't like fish, the only option in general is either salmon or trout and for the past couple of years, I tend to bulk buy large fillets with the skin on, then cut into around 350g pieces and freeze. In general, I do variations on this recipe, but it seems that Lundulph has had some time on his hands and has been looking for something new for me to try and printed out one of Ottolenghi's lovely recipes from The Guardian.

The printout spent a couple of weeks on the fridge door, until I got my act together and included the ingredients in my weekly shopping list. I had to adjust the amounts for 2 portions and overall this recipe was a very pleasant surprise, as although it reads like something tasty, once I started making it, I lost confidence entirely that it would work at all. Having said that, I think a couple of tweaks are in order, but very minor ones and I've incorporated them below.

What I didn't expect was that the tahini mixture would puff up. Also I didn't expect all these fancy items to work together so well. I bought za'atar and sumac when I went to Dubai 7 years ago and I never really used either of these sadly. I did buy new batches for this recipe, since even if herbs and spices keep for a long time, I think 7 years is pushing it.

Lately I've also taken to baking mushrooms in the oven, very much like this recipe, but without any fillings, just a sprinkle of salt. So I made these before the salmon and also steamed some potatoes and we had a lovely dinner at the start of April. 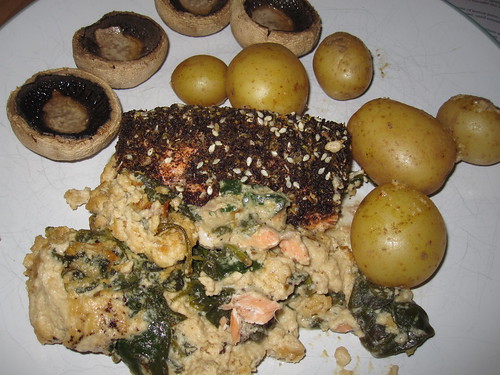 With the coronavirus raving across the world, we're staying at home pretty much all the time now. I go out once per week to get some greens and fruit and I managed to book a delivery online for a huge stash of canned and dried pulses and various forms of dry carbs - pasta, couscous, rice, amaranth... Having grown up with my Mum, first in a communist country, then moving to Sweden and living on only one income for a number of years, I've learnt to stock up and save as much as I can, so being in a lockdown hasn't affected us too much yet.

Plus I have planted vegetables in our little greenhouse, in case food does start to run low. If nothing, it gives me focus when I'm out in the garden, something to look after and enjoy at some point in the future, not just weed and mow the lawn.

Posted by Caramella Mou at 1:19 pm