Some time ago, my Sister discovered a recipe for frozen mojito cheesecake, which she made with great success among her friends. Recently she made it again, this time using up all the fresh spearmint my Mum had and as thanks,treated my parents to a small version of this cake. My parents did enjoy this very much and my Mum sent me the recipe once more. So as the English part of the family were gathering to celebrate Father's Day this week-end, I decided to make it, since we were going to have a barbecue and I thought an ice cream cake would fit nicely.

The original recipe is in Swedish and can be found here. Reading through the recipe, the basis for the ice cream was very similar to the very smooth and rich non-churn ice cream I made last year. What also threw me a bit was that after making the ice cream mixture, it was to be poured straight into the springform tin. I had to read the instructions several times, until I realised that the biscuit base goes in at the end, on top of the ice cream mixture - the cake is made upside-down and turned onto a plate before serving.

To be honest, I didn't like this one much. The mint was very overpowering and perhaps using spearmint works better, but it's not something that's easy to get hold of where I live, so I'll need to sow some and try again. Also possibly use more lime zest, although it looked like a lot from 2 limes.

I also wanted to make the cake pretty, so I buttered the bottom of the springform, and fixed large mint leaves in a circle, with the idea that the ice cream would freeze and they'd remain stuck to it.

Sadly this was not to be, the leaves remained stuck in the butter.


My brother-in-law Roger and oldest niece Lou were very good and carefully peeled off each mint leaf and placed them on the cake again. It went quickly of course, even though we'd spent most of the day eating, there's always room for ice cream. But as I said, it didn't quite wow me, though the others said it was nice.

One good thing was that as Lundulph and I were preparing to leave for Roger's place, I caught sight of a new cookery show from Mary Berry, where she was demonstrating her favourite Knickerbocker Glory - which is an ice cream with fruits and the ice cream she made from scratch and it was very much the basic recipe as I've done here - eggs, sugar, whipping cream, so since I have some dulce de leche left, I'll make some ice cream next week, perhaps something with pistachios.

Posted by Caramella Mou at 17:35 No comments:

Well, I finally got round to harvesting the rhubarbs this year. They haven't been too prolific, but then I did harvest them last year, so I should have left them to recover this time, but I really fancied making something with rhubarbs and also wanted to clear out some space in the freezer, where I had two packets of diced frozen rhubarbs as well, not sure from which year. And as the fresh rhubarbs were mostly fairly thin long stalks, I decided to use them for rhubarb muffins. But I wanted to try out a different recipe to the one from Dr Cutie.

And then I remembered that my dear friend Patsy made some fabulous bilberry muffins for a good-bye fika, when I moved back to the UK in 2012. So yummy that I promptly asked her for the recipe and here it is, but with fresh rhubarbs, rather than frozen bilberries. The original recipe is in Swedish here.

The original recipe states that the amounts are for "6 portions", but this doesn't necessarily mean 6 muffins, although that was my original assumption. I started with 12 muffin cases and had to add 8 more and a second muffin tin. And like never before, they rose perfectly without busting like volcanoes or spilling over the edges and they didn't sink back when they came out of the oven, so finally success.


And boy, were they tasty! Lundulph didn't even wait until they had cooled down and ended up having to scrape crumbs off the paper case. Once they'd cooled down, they were easier to peel. But as per usual, he wants me to inject a blob of custard in the middle. I did think of that, but I'd planned things badly and couldn't try out my idea about this custard-in-the-middle concept.

As to the frozen rhubarbs, I made jam once more, my old recipe. But as the fresh rhubarbs were a bit on the depleted side, I used the thinner stalks for the muffins, as they seemed less fibrous and the thicker stalks went into the jam along with the ones from the freezer. Lundulph asked when we could start eating the jam, but he'll have to finish the jams he has on the go first. I'll save a jar for my Sister Bip, she really liked it with cheese.

Posted by Caramella Mou at 21:53 No comments: 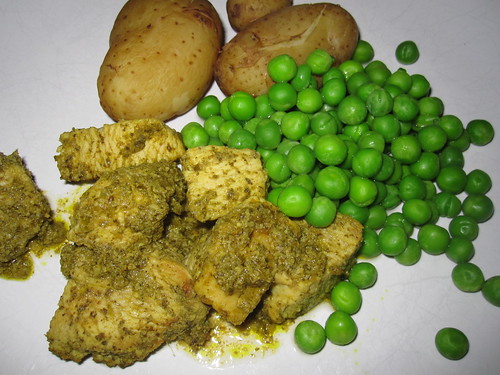 A couple of weeks ago, there was a fête in a nearby village. We've been going to it for many years, it's a nice walk across the fields, even on rainy Spring days. This time it was a very warm and sunny day and we'd also decided to do a longer walk before the fête started at lunchtime. After the really nice walk in an area we didn't think existed, we went straight for the book stall and there I found a small treasure - The World Encyclopedia of Spices. It's not exhaustive in any way and I've used most of the spices described in there, but the book has some good tips on how to determine the quality of different spices. The book also has a lot of recipes for different spice mixtures and pastes, which is the really interesting part of the book. What really caught my eye was a recipe for green masala. This is not a dry spice mixture, but a paste and looks very much like pesto, but smells and tastes quite differently. Lundulph is sold on it and has suggested we move into industrial production and sell it.

A key point to note is that this requires a little bit of planning, as there's pre-soaking and resting/cooling time required before it's ready for use. A spice mill or a clean coffee grinder is needed as well, for best results.

I recommend once it's in the fridge, it's left for a further night to allow the flavours to develop even further. A key point is the keeping of a layer of fat on the surface - after each use, I've topped up with a little grapeseed oil, to make sure the paste is kept sealed.

Now this can be used as a marinade - I used about 100 ml for 600 g chicken breasts, which had been cut into bite-sized chunks and I coated them with the green masala and left overnight in the fridge. I fried the chicken in a little toasted sesame oil and served with steamed Jersey Royal potatoes and some green peas.

Last week we had intended to barbecue and I wanted to try this out on another batch of marinated chicken. Sadly it rained the whole day, so I ended up frying it again, but this time we had it with Lebanese flat bread and hummus, also very tasty.

My plan for the remaining paste is to try it on salmon, before baking as usual in aluminium foil. Then I'll have to make another batch, probably a double one and freeze in ice cube trays as the other recommendation for this paste was to add a tablespoon or two to a regular curry, especially if it has coconut milk in it.

Lundulph also requested that I modify the recipe so that it can be used as a dip as well. I'll have to think about that, as it's very strongly flavoured in its "raw" form. The other thing Lundulph was speculating about was whether dramatic changes can be made to a traditional pesto recipe, so as to get the same texture and colour, but completely cut out the parmesan cheese. Another one to think about.

Posted by Caramella Mou at 23:11 No comments: