Finally Lundulph and I managed to get our acts together and have a dinner party. I've been wanting to do this for ages, but there have been so many other things to sort out. Tonight was Bulgarian night and I had made Shopska salad for starter. This is a fairly regular salad with tomatoes, cucumber and lettuce with grated feta cheese on top. I added roast peppers and radishes to that. Traditionally it should have onions and coarsely chopped parsley. This is not really suitable for the season, but I couldn't think of a more Wintery starter.

The main course was my moussaka, made in the small colourful terracotta pots. That went down very well indeed.

And for dessert, I made the following dessert, which I don't remember the original name of. 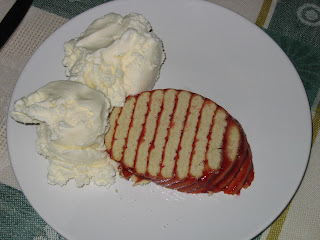 This holds rather well for days. The dry biscuits will soak up quite a bit of the jam and the whole thing should become fairly solid and easy to cut. Of course other jams will work just as well, but they should be of a strong colour so that the stripes come out.
Posted by Caramella Mou at 19:05 No comments:

Well, the preparations of the previous days culminated in a big party yesterday and it went on well into the night and today.

I managed to get a snap of the table before too many guests had arrived. 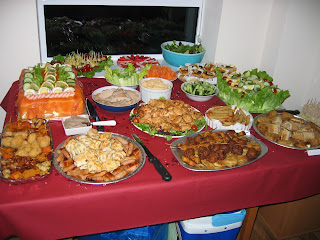 Posted by Caramella Mou at 21:34 No comments: 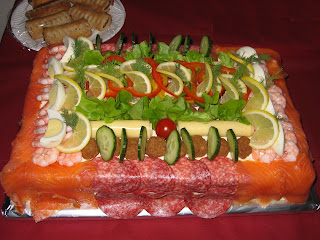 The Friday was the last day for preparations and was entirely dedicated to the pièce de résistance, a Swedish smörgåstårta or sandwich cake. This is the standard Swedish party food and is very good when a large number of people are invited. It's fairly easy to make and looks very impressive. Everyone has their own recipe, the following one is one that my Mum has developed over the years and I don't think I've changed it that much. Also it represents what I most like about my Mum's recipes - you can stop at some point and it's ready, or you can continue to add things to it to turn it into a different dish. In fact it epitomises this concept.

I made two - one larger one for the meat eaters and one smaller one for the vegetarians. I also ended up with some of the creamy stuff to spare, it would have been enough for two large cakes. 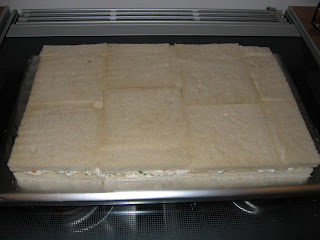 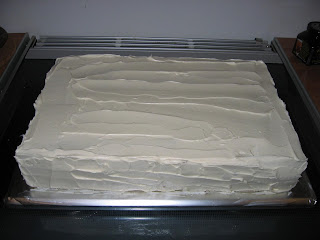 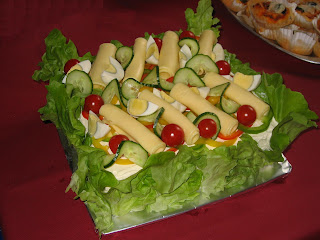 You may possibly recognise the creamy stuff from before, it's pretty much the recipe for white sauce, but with some yoghurt added as well, to make it a bit lighter. In fact, all of the ingredients can be "light" or "diet" varieties, apart from the yoghurt, which must be full fat and strained, or it'll be too runny and the bread will go soggy.

As for the peas and carrots, in Sweden you can get them ready mixed in cans, with the carrots suitably diced, but I couldn't find any, so had do get them separate. Again, draining is vital. But you can use other things instead, like canned diced mushrooms or diced cooked ham. In addition to adding interest in flavour and texture, they serve the purpose of preventing the cake sinking in at places, should the bread soak up the cream at different rates.

Also what struck me the other night is that if you add mushrooms and ham and boiled potatoes (all diced) to the creamy mixture, you'll pretty much end up with a Russian salad, as it is done in Bulgaria.

I was lucky in that the cakes hadn't sunk in anywhere and didn't need much repairing after the transport, so the leftover smooth cream went in a bowl to be used as a dip.
Posted by Caramella Mou at 19:40 No comments:

On Thursday I had a bit of a rest night, in that all I made was a large number of kisses, this time also with walnut halves. I think they were the main hit of all my dishes at the party, so difficult to stop eating them.

This time I followed my comments on the original blog entry and used 1 part egg whites with 2 parts icing suger per weight, but this didn't work out well at all, in fact the mixture went runnier than it was originally. I tried to compensate by adding a couple of table spoons corn starch, but it made no difference to the consistency. So piping was also difficult and I put fairly small blobs on each nut half. Baking went fine, but the meringues went beige coloured, I suspect because of the corn starch. So further experimentation is in order. Either way, the kisses disappeared very quickly.
Posted by Caramella Mou at 19:35 No comments: 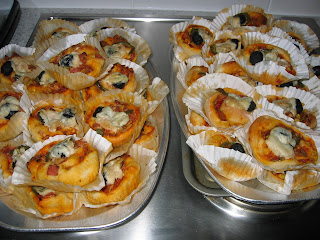 On the Wednesday, I made pizza rolls. This is the same principle as with the cinnamon buns, but is done on a pizza instead. I made the pizza base in the bread machine and I made two lots - one with meat and one without.

Sadly the first lot was way too soft and the rolling was quite tricky and cutting the twirls was even more so and messy too. For the second lot I used a very generous amount of additional flour and worked a bit better, but I took too long to do the whole process and it went soggy and just as messy. Once in the oven though, things sorted themselves out. Next time I think I'll try the much stiffer wholemeal base instead, it should make things a lot simpler.

So the trick is to make the tomato sauce very very think. I used 2 cans of tomatoes and drained them, to speed up things a bit. The onions were chopped very finely and I also sliced some canned mushrooms and added to the sauce, again well drained. The cooker was quite orange from all the spluttering, but the sauce was as thick as a paste.

Then I rolled the dough into a rectangle and spread the paste apart from a 10 cm wide strip along one of the longer sides, which would end up as the outer edge of the roll. For the meaty pizza I cut pepperoni into small pieces and added some capers before rolling it and slicing. Each twirl was then placed in fairy cake paper forms, decorated with a slice of jalapeno, an olive and a thin piece of parmesan and baked at gas mark 6 (220 degrees C) until it got a nice colour. For the vegetarian ones, I used sweet corn and pickled roasted pepper strips, but with the same decoration. They didn't look as pretty as I'd hoped for, but worked quite well and were very moorish. On the whole, I should also have cut the mushrooms smaller too. And the paper forms were not very good either - they soaked up a lot of grease, some of it orange tinged from the tomato sauce and it didn't look nice at all. Perhaps I'll try without them next time.
Posted by Caramella Mou at 19:19 No comments:

It may appear as we haven't eaten this month, but in fact, I've been so busy cooking this past week, that I haven't had time to update the blog. That and the possibility that Lundulph's Mum might have a peek and spoil some of the surprise. Lundulph's parents celebrated their 40th wedding anniversary this week-end and so a party was called for, a party with lots of food. I made a very precise schedule, which I managed to follow just as precisely.

On the Tuesday, I made hummus and chicken liver paté, having never made either before. But I'd planned on trying the hummus ages ago and had a jar of tahini in the larder in preparation. The recipe is one that I'd written down on a small piece of paper, so have no idea where I got it from. As an aside, I have done this for many years and have a large collection of post-it notes and shopping receipts with recipes scribbled down on the back. 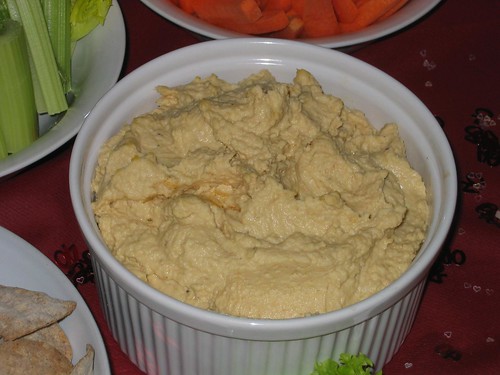 That's all there's to it. On the whole, I think I used a bit too much tahini and not enough olive oil, it felt a bit dry. Also it's a good idea to leave the hummus over night, to allow the flavours to develop. Very nice to dip, that's for sure.

The second thing I made that evening was chicken liver paté, mainly inspired by Fred & Ginger who had made some for us the other week. I had a recipe from Waitrose from ages ago, which seemed simple enough.


The recipe recommends Muscat de Beaumes-de-Venice and unfortunately that's the only thing I forgot to get, so I used a Syrah Rosé instead. Very intrigueing this paté thing, when it was ready in the blender, it had the consistency of chocolate mousse, but tasted of liver. I transferred it to a box and put it in the fridge, hoping that it would go a bit solid at least. It did and it was really good and had the nice smooth texture that you'd expect too and tasted lovely. It went particularly well together with the knäckebröd I made last month. 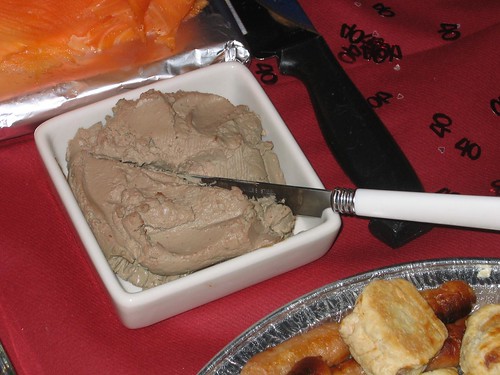 Posted by Caramella Mou at 18:55 No comments: