I've been aware of this Japanese speciality for some time and have had in the back of my mind to try it out. Today I did, after researching on the net for a couple of days, having decided on this recipe.

I spent last week getting the ingredients together but was unable to find dashi stock. Looking into it further, apparently dashi stock is made on dried giant kelp and dried bonito flakes. Now as you know, I'm not a big fish fan, so dried bonito flakes did not appeal in the least. But I found that occasionally the dashi stock can be exchanged for chicken stock. Also I had a few vegetables to use up. So here's what I concoted tonight. 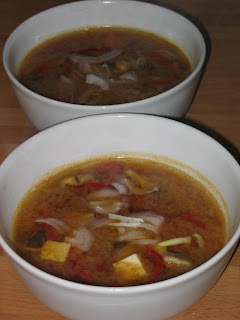 I had a little taste of the miso and had a very bad feeling of the soup, but on the contrary it turned out quite delicious. Lundulph had seconds. He also topped up with a few slices of chorizo. I think I'll try adding strips of chicken or pork next time. Now we'll finish off with some lovely ginger cake that we bought from our local farm market on Saturday.
Posted by Caramella Mou at 19:59 No comments: 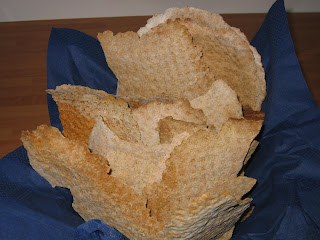 Finally after much consideration and sidetracking, I made some research on the topic of knäckebröd and baked some today. This is definitely a part of the Swedish staple diet, one interesting article (in Swedish) talks about the knäckebröd belt that goes through middle Sweden and that it has been a life saver for many during the late harsh Swedish Winters, when other food has run out.
There is also a plethora of recipes on the internet and out of the three I chose to look into, limitations on ingredients combined with the lateness of the Sunday afternoon and it's relation to the opening hours of suitable types of shops, I decided to experiment from the start and combine elements of the three recipes.

Here is the special knobbly pin that's so useful for these. I got it for Christmas last year from my sister Bip. 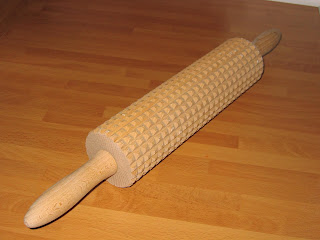 Method
Because the bread is so dry, it stores well for a very long time. It's also very versatile - it's great with cheese, paté of all kinds, not to mention with fish. But also good with just butter or with jam. We went to our local farm shop yesterday and bought a number of interesting chutneys and relishes, so I rather suspect it will be nice to dip with.

While I waited for the dough to rise, I found some inspiration from this blog. I'll definitely try out the recipes there, for now I just used my new Halloween cookie cutters. 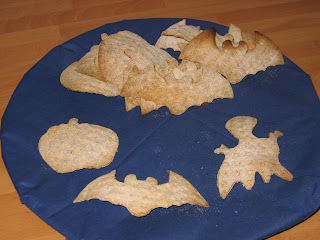 I made some mistakes though. The very first lot was not baked completely, as I didn't pre-heat the oven long enough. Then as I was rolling, I kept rolling thinner and thinner and some did get burnt. As for the fennel seeds, I bought mine at least 2 years ago for a particular dish and have kept them in an air-tight jar since. So they had definitely lost some of their flavour, but there was enough left in them, to just give a very mild hint in the bread every now and then. Unless you are a big fan of fennel, I'd suggest a reduction in the amount if the seeds are fresh.
Posted by Caramella Mou at 16:30 No comments:

Today Lundulph had a very hard day. We knew it both in advance and I decided to give him a treat and make a new dish from my Thai cook book. This is indeed a beautiful cookbook, the photos are brilliant and even to a person like me that doesn't eat seafood, the seafood dishes look nice. Unfortunately it is an American book and all recipes are given with American measures. In addition, I think they have seriously underestimated some amounts, not to mention cooking times. The translation into metric leaves a lot to be desired too. So I end up correcting it and I don't really like to do that the first time I follow a recipe. My Mum can just read a recipe and know what's wrong with it, but I haven't mastered that knack yet. Well, excluding Thai fish sauce, Nam Pla (that sounds like Klingon, hi, hi). The book is very generous with it, I think the number of tablespoons of fish sauce should be halved and the unit should be teaspoons. Then it's just right.

Anyway, enough rambling. Today's recipe is called Guay Teow Raad Naa and is translated as Wide Noodles with Cream Sauce. And below are the measurements I used, not entirely according to the recipe.

Given my mishaps over the last week, I had very low hopes for this, it didn't look anything like the picture in the cookbook, but boy, was it tasty! So I did managed to treat Lundulph to a nice dinner. Will try to get a photo up tomorrow, we were just too hungry to bother with that today.

28.10.2007 update:
Here is what it looked like, not too esthetically pleasing, but very tasty indeed. Posted by Caramella Mou at 21:46 No comments:

Well, after all the hints Lundulph has been dropping over the past days, I finally made bangers and mash for our Sunday dinner to celebrate the British Sausage Week. 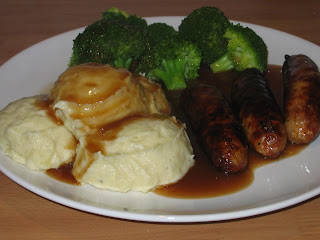 Together with Delia's perfect mashed potatoes. The sausages were some new-fangled thing from Sainsbury's with jalapenos, loads of garlic and lime and turned out to be very tasty.

I also made a potato soup again, this time with leek, but that didn't help much, it didn't taste very nice, though it wasn't as bad as the first one I made a few weeks back.

Then finally I had two cartons of Fläderdryck from from the Swedish shop and thought I'd try to work out the fab dessert we had at Fred & Gingers a couple of months back. I'd never made jelly before, so the whole thing was rather exciting and I wasn't sure what to expect. I certainly didn't expect it to take overnight for the jelly to set. Here's the result: 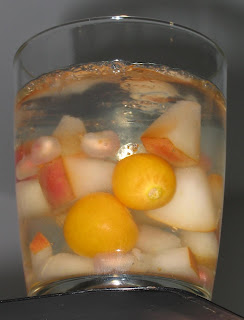 The fruit is physalis which turned out to have been picked far too early and was quite sour, some rosey Commice pears, which were quite tasty and fragrant and pomegranite. I love pomegranites and when I saw these in the supermarket, I just had to buy them. 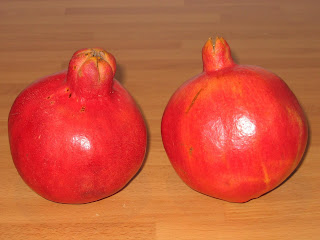 And they turned out to be quite sweet too, translucent pale pink. But once in the jelly, their colour was drained into nothingness. The jelly was quite tasteless, so note for the future - use juice concentrate and fruit with more colour and flavour too.

So I seem to be in some sort of inspirational low cooking-wise. But I went to the Rumwong Thai Market in Guildford and got some interesting ingredients that I'll be trying out tomorrow, we haven't had Thai food for ages.
Posted by Caramella Mou at 20:10 2 comments:

Once again, I end up spending most of my Sunday in the kitchen cooking for the whole next week. My life-work balance is off balance at the moment, but some ingredients were left over from today's escapades and I've plans for them later on in the week. But today it was time to do another salmon pie. This time I remembered not to use any salt in the greens, sadly, when I looked back at the recipe, I realised that I'd forgotten all the herbs, so no wonder it didn't taste of much. The difference this time is that I chopped 2 green chillies and put in, but they turned out to be quite mild, so we didn't notice them. Also I only had one packet of puff pastry, so I rolled it enough to wrap it around the salmon and the greens. 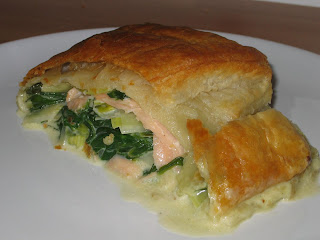 Posted by Caramella Mou at 21:25 No comments: 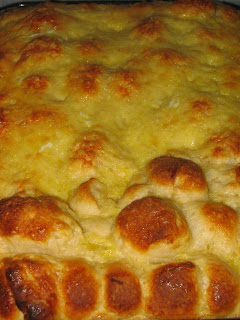 I've been wanting to do this Bulgarian bread for ages and I had a big box of grated cheese in the fridge which needed using up and so I baked milinki (милинки). They are popular as a snack or for breakfast in Bulgaria. Sadly they need some fine tuning as they were quite far from what my Mum's milinki taste like. Nothing wrong with the ingredients, mind you.

As you can see in the photo, I left some without cheese for Lundulph, however without the cheese, it's just plain bread. I think traditionally you'd use feta cheese and mix it in the dough. The milinki are quire nice hot with tea and we used to dip them in icing sugar, which sounds very strange, but is quite tasty with the saltiness of the cheese and the sweetness of the sugar combined.

This is the first time I make these and I'm not happy with them one bit, if you look in the photo, the middle is very yellow and didn't bake well, this is a new behaviour from my cooker - it seems to bake only along the edges. Also I need to work faster and make the dough balls smaller, as by the time I'd filled the baking tin, the first ones had already risen to twice their original size. I'll have to watch my Mum when she makes them to work out the secret. The milkinki are good to freeze as well, I recommend cutting them up first, though. Then just reheat in the microwave when needed.

The interesting thing is that the dough can be used to make ordinary bread, or as pizza base or as the Bulgarian mikitsi (микици), which are similar to doughnuts or churros. That's yet another thing my Mum makes regularly and we have it as a treat when we go to visit, it's far too greasy to eat often.
Posted by Caramella Mou at 16:31 3 comments:

Gosh, this past week has gone really fast! And thanks to my cooking last Sunday, we've lasted throughout it. Well, Lundulph was out a couple of evenings too. 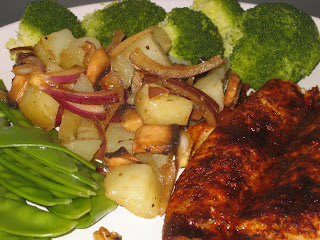 Some time ago, Lundulph had had mackerel with paprika aioli and really liked it. So in the hopes of making the same at home, he bought some mackerel fillets. We'd frozen them for future use and defrosted them yesterday. The instructions I had was mackerel fillets with paprika aioli. Now, I didn't have enough garlic to make aioli and wasn't really sure about the paprika part, so this is what I did instead:


Method
Sadly I didn't time the fish and it was a bit over-done and chewy. Also I don't think the freezing-defrosting helped either. On the whole mackerel is a lot fishier tasting than I thought, and I'm not really a fish person. But Lundulph liked it, even if it was far from what he'd eaten at the restaurant. I'll try the paprika aioli next time, I think I need to smother it with garlic to take out some of the fishiness of it.

Our greens were mangetout and broccoli. The broccoli seems to be in season now, as it looked very good, but didn't really work well with the fish and potato salad flavour-wise. The mangetout was better, but since it's well out of season, it was a bit stringy.
Posted by Caramella Mou at 08:23 No comments: