My Sister Bip's been to visit us for a short week. She had a few days left on her holiday and decided to come over for Lundulph's birthday and some shopping. And it's during this that she bought me a little book called Peek-A-Boo-Cakes, which was rather interesting, particularly after my dismal failure at Falbala's last birthday. This book has a more traditional approach to hidden design cakes plus some quite novel ideas, which seem very appealing and I might try later on.

I took Friday off, to make sure to get all ingredients and bake the cake. Also Bip wanted to go to our local farm shop, she's been there before and wanted to go back to have a look at the various curiosities they have there. And she wanted cream tea for breakfast and it made quite a nice start of a long day.

It was Bip that chose the cake for Lundulph this year. I was a bit skeptical to it, but thought that worst case it would be similar to Falbala's latest cake - ugly, but very much edible thanks to all the sugar in it. Also Bip had brought me 500 g of 60% marzipan, not something you want to waste just like that.

I made some stupid mistakes here, it's embarrassing to mention really. Still it turned out quite nice.

Overall, I'm rather pleased with the result. The mistakes I made were that I skipped sifting the flour and baking powder. Really a beginner's mistake, I really don't know what I was thinking there. I had a number of lumps in the cake mixture, I fished out the biggest ones and was worried I'd end up with big holes in the sponge, but it was actually OK. A lucky thing was that I had cut the lining paper for the sides a bit wider than necessary. This was good as I filled up the cake tin and when it baked it rose up and was attempting to escape, so an extra cm or two of baking paper is recommended very strongly.

I also had to cover it up after one hour, since by then it looked ready. The book said to test the cake with a skewer, but I'm not sure it would work because of the marzipan. I think it would end up cleaning the skewer on its way out, so you wouldn't be able to tell if the cake was done or not. I gave it 1 h 30 minutes, at which point it had come away from the paper lining a bit. I also touched it and it felt firm.

Once it was out of the oven and on the rack, it sort of sank in at the middle. This was very worrying, I though it meant it hadn't cooked through, but at this point it was fairly late in the evening, so I left it at that to cool. I covered the cake the following morning. Now here I made another mistake - I didn't gently try to work around the edge, but squashed the whole lot in and of course ended up with some folds. The principle is the same as with fondant icing, but with marzipan more care is required as it can crack, at least at the 3 mm thickness I made it. The original recipe called for 800 g marzipan just to cover the cake, but I think that's a bit of a waste. I used 300 g and this was just right, but 400 g would have been easier to work with and you wouldn't need to worry about centering it perfectly. I ended up rubbing the whole cake for ages to hide the edges and various other lines. Again, latex gloves are brilliant and I didn't need to change them between the various colours either, one pair were enough for everything.

One unexpected surprise was that the purple food colouring didn't cope with being baked - as you can see in the photo, it's gone orange, when it was an aubergine colour when I put it in the cake. This didn't matter here, but is good to keep in mind in the future. I'm not sure there was a comment on this on the packet either. I'll have to try a different brand next time. As for the covering marzipan, it's not baked. However just using the purple resulted in grey colour. Bip said it would not be acceptable on a birthday cake. So I added a little of the red paste and it gave a really brilliant purple colour. So on 300 g marzipan, I had 2 ml purple colouring paste and 1 ml red colouring paste.

Mistakenly the green food colouring was liquid, I really wasn't pleased with this, as it means the mixture being coloured is diluted. This didn't seem to be a problem with the marzipan, but if colouring batter or meringues, it is important not to ruin the proportions..

As expected the whole thing was massively marzipan-y in flavour and went down extremely well with most of the family. We still have half a cake to go, along with lots of other things too. Birthdays are hard sometimes, when it comes to dealing with the leftovers.

Posted by Caramella Mou at 22:51 No comments:

Sorry for dropping off for several weeks, I've reached new heights in stress levels at work and I'm worried that I'll start looking my age. There are bags under my eyes and there are wrinkles and what not. But things have finally calmed down and my inspiration and creativity is on the mend. 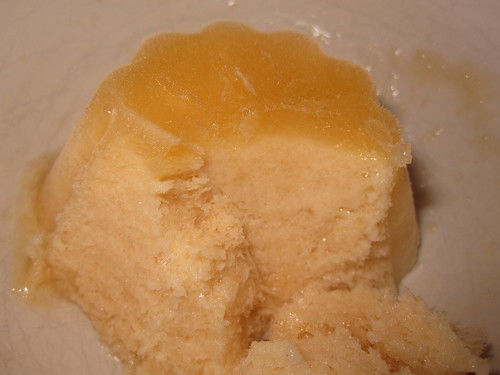 It is also the time of the year when the large pear trees in Lundulph's parents' garden are loaded with fruit, which is ripening and falling down and creating a health and safety hazard. So the week-end before last, Lundulph and I made a special trip for the purpose of picking pears and came home with a large bagful of the lovely things. OK, they were a bit on the hard side and quite a few of them were russet-y, but on Lundulph's Mum's recommendation, I left some of them on the window sill and a couple of days later the pears had turned yellow and started to go soft.

Thus the question came up - what do you do with a glut of pears? For some reason I plucked the word "sorbet" out of the wrinkles of my brain and did a quick search on the internet. And I was lucky to find this recipe (in Swedish), which turned out to be very easy and stunningly tasty.

I still don't have an ice cream machine, but decided to go ahead anyway, freeze the sorbet into ice cube trays, then run in the smoothie maker to basically turn it into some sort of granita or slush puppy. I also forgot the walnuts, again this turned out not to be an issue.

I was only able to find one ice cube tray, so distributed the rest of the sorbet mixture into my silicone brioche moulds. Then into the freezer they went last night and tonight we had some of this wonderful dessert. As I took it out, I realised that after a whole night and a whole day, the sorbet was still rather soft and would not require the smoothie maker treatment. So no need for an ice cream machine.

The one "special" thing I did was to use my vanilla infused caster sugar, though I don't think it made any difference. However, some cinnamon might be nice and possibly almonds rather than walnuts. I also wonder if this sorbet would work with other fruit like apples, bananas and mango. Actually I thought it was a bit on the sweet side, I'll use 4 tbsp of honey next time. I'd not realised how sweet the pears were.

Lundulph's verdict: Very nice, it was like eating frozen pears, but with a really nice texture. He also theorised that this might not be possible to achieve with shop-bought pears as they are varieties with long shelf life, rather than sweetness/softness/juiciness.

Posted by Caramella Mou at 22:03 No comments: