I've been casting my eyes onto the packets of kadayif in the Turkish shop, every time we've visited Lundulph's parents and since we're doing New Year in the UK, I decided to follow a tradition and make kadayif.

Actually the tradition is baklava, however kadayif is filo pastry which has been finely shredded and is done in pretty much the same way - one layer of pastry at the bottom, chopped nuts and cinnamon in the middle and a second layer of pastry on top.

The kadayif pastry I bought had been folded up a couple of times the way it came out from the shredder, so each strand was neatly lined up. Based on vague memories of what my Mum's kadayif used to look like many years ago, and what I personally find quite attractive is that it's all jumbled up in the baking tray. So this is what I did this time and this resulted in the kadayif increasing dramatically in volume, so that I had to swap to a bigger baking dish, and even that one just barely fitted everything in. Don't get fooled if it looks like a small packet.

Another thing to keep in mind is that just like filo pastry, this dries out very quickly, which is why I wrapped it up in a damp sheet of baking paper. It requires some good planning and swift work, so all ingredients should be ready measured up/chopped/melted/whatever, so that the kadayif can be put together as quickly as possible.

I did some brief searching on the web - most basic recipes are a variation of the above. Most seemed to use a lot more butter than I did and less syrup, but I like the kadayif to be sweet and moist. I'd like to try a couple of more rounds and experiment with different ways of shaping. I think trying to make like tubes filled with nuts would be good. Definitely less syrup here though.

I also think a spray contraption for the butter would work better and get the kadayif pastry more evenly "buttered". In fact the recipe on the packet recommended dipping the whole lot in 250 g melted butter, then dividing in two and sprinkling the nuts in the middle. Perhaps also breaking/cutting up the kadayif into shorter lengths might make it easier to work with.

The original recipe I followed only listed walnuts, but I did equal parts walnuts, hazelnuts and pistachios and would have used others as well, if I had any, but since Lundulph developed a sensitivity to nuts, I'm not buying the copious amounts I used to in the past.

This amount was massive, and took a while to get through, since we didn't manage to get the whole clan together this year, so if I try this again, I'll halve everything.

Posted by Caramella Mou at 14:47 No comments:

Since my Sister's regular escapades into the vegan lifestyle, my Mum has actively tried to accommodate this into the various seasonal celebrations. A Swedish tradition at both Christmas and Midsummer is to have marinated herring of various varieties. So a vegan version would be swapping the herring for aubergine. Last year, Mum made a Swedish recipe and to be honest I didn't like it much at all. This year, my Mum made the vego-herring once more and I was reluctant to try, but they turned out to be very tasty. So what was the difference? This year, it was a Bulgarian recipe, which I jotted down before we flew back to the UK. And I bought some aubergines straight away and spent most of last evening making these. 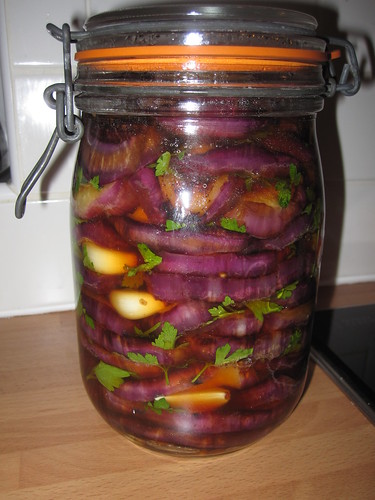 ~1 kg aubergines, about 4
salt
oil for frying
1 dl cider vinegar
1 dl water
peeled cloves of garlic, about a head and a half
sprigs of parsley (optional)

My Mum takes the time to cut the aubergines into strips to make it look like herring fillets, but I did circles, as this was the instruction of the original recipe. However, I think strips would be easier to pack in the jar, I ended up with quite a few gaps between each layer, but I did my best to press down. 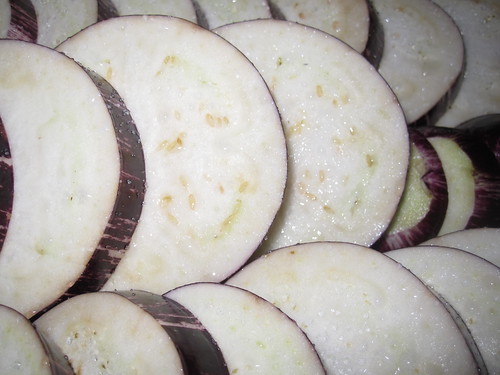 Amazing how much liquid they contain!

Update 12th January:
These turned out spot on and were super tasty, we got through them alarmingly quickly.

So I immediately bought double the amount and used my mandolin to slice the aubergines length-wise. The mandolin cut them a bit thinner than I'd intended and what I did manually during the first run, but there is no way I'd risk cutting off my fingers attempting to cut an aubergine lengthwise with a knife.

There were so many of them, I had to make these over two days and even then I had to bake them in several batches, the slices lined next to each other onto a roasting rack and brushed lightly with grapeseed oil.

Because I'd doubled the amount, I also needed to double the pickling mixture and I still ran out and had to do a further half of the above amount. I also used a large spoon to press them down in the jar and used a metal skewer to remove all the bubbles I could see.

Initially the flavour was a bit different and I thought it was down to baking rather than frying, but in hindsight, I think they just needed a bit longer in the jar before starting to eat them and possibly using more of the pickling mixture to start with. But they were just as nice and I discovered they worked a treat between to toasted slices of bread, no need for butter or anything like that. And they do last long too.

A word of warning on the garlic - it is very tasty, but also very strong in flavour and your breath will smell for days. So I recommend using in stews and soups instead of fresh garlic.

Posted by Caramella Mou at 10:21 No comments:

When I started this blog back in 2006, one of the earliest experiments I did was to try my hand at Swedish gingersnaps. Sadly I didn't put any reference in that blog post to where I found it, but it turned out to be a winner and I've never strayed from it since.

Lussekatt recipes, however, are another matter entirely, year after year I try and I've not been happy with them. Until this year. And it's actually a recipe I've made before, but this time without the filling and with a new tip from my Mum's weekly magazine. And Lundulph will not stop eating these, I swear his stomach is taking the shape of a giant lussekatt.

Makes about 75 small ones

Use the left-over dark rum from the raisins to enhance your mulled wine.

Posted by Caramella Mou at 22:16 No comments: