I made this last Sunday, and thought I'd already added it to the cookbook, but apparently not, so here it is.

Method
The soup is now ready and is nice on it's own. Some people add vinegar just before eating.

As usual, Lundulph needs meat and this week-end I got him a nice piece of unsmoked gammon, which I roasted as recommended in Delia Smith's 'How to cook'. I got two pieces of aluminium foil, placed them in a cross, put a bunch of thyme, sage and black pepper in the middle, placed the gammon on top, then put more thyme, sage and black pepper over it and wrapped up the foil into a parcel. Baked in the oven at gas mark 4 (180 degrees Celsius) for 1 h (Delia recommends 20 minutes per 1 lb meat + 20 minutes on top of that). Then I unwrapped the gammon, scraped off the herbs on the top and put it back in for another 30 minutes on gas mark 7 (230 degrees Celsius) to give it a bit of colour. Not sure if this was a good idea, it just seemed to try out. Lundulph said it was rather nice.

Next time he's asked me to cook the meat with the soup, so that it can pick up some of the flavours. We agreed to try thin strips of chicken or turkey breast.

I had the last of the soup today, so there's nothing to photograph. Sorry, will try to remember to add some next time.
Posted by Caramella Mou at 21:58 No comments:

This is a quintessential Bulgarian dish. Well, the name of the dish sounds Turkish, so the whole dish is probably Turkish as well.

It is eaten as a "meze", that is a starter to line the stomach for the rakia. Lundulph likes to dip bread in it. I like it as a spread on toast. 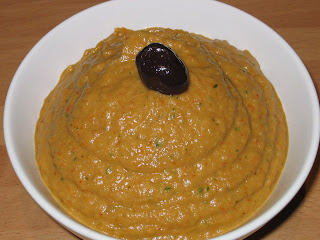 Note that the quantities are very approximate.

Method
If you do this quickly, the kyopoolu will still be warm when it's done and is very tasty with hot toast. But it's nice cold too. Store it in the fridge and stir through when serving after that.

I have successfully frozen it too, though it tends to go a bit watery afterwards. A better way is to roast peppers and aubergines, peel and wash them and then freeze in the right amounts. Then just blend together. As for garlic, if it's Friday, I tend to put more garlic in, as I like it as garlic-y as possible. Lundulph doesn't agree, reckoning the amounts I put in completely dominate the dish.

We had a Bulgarian meze dinner tonight with turshia, ham, toast and rakia, in addition to the kyopoolu. It was very nice indeed.

And what I fogot to mention is that on the picture above, I used 3 green, 2 red and 2 yellow peppers, which is why it looks a bit like poo. If you only use green peppers, the colour will be pine green and it'll taste less sweet. If you only use red peppers, then it'll be more orange in colour and taste sweeter too, of course.

An idea that just struck me is that if you cool it in the fridge, then pipe it onto small crackers or pieces of toast, it would make nice canapés.
Posted by Caramella Mou at 21:05 No comments:

Sainsbury's have stopped selling grape seed oil in 1 litre bottles. This is very annoying indeed. But according to my Mum, the thing to cook with these days is oil made from rape seed. The reason for this is that this oil is rich in Omega3. This is not mentioned in Wikipedia, however, the page on Omega3 fatty acids does mention grape seed oil specifically.

Of course, the Wikipedia content should be taken with a pinch of salt and Sainsbury's are selling a vegetable oil, that according to the ingredients is made of rape seed and I've bought a bottle to try it out.

Before Christmas, I also bought a small bottle of toasted sesame oil and another one with walnut oil. I've tried the walnut oil as salad dressing and it was very tasty.

As for the toasted sesame oil, I'll use it next time I make stir fry.
Posted by Caramella Mou at 11:50 No comments:

After my first week at my new job, I'll have to say that there won't be much time for cooking during the week and sadly, I'll mostly only make updates on the week-ends when I have time to cook.

Lundulph asked for a roast dinner, while I was making plans to use up at least some of the many salmon fillets in the freezer. Also there is half a can of goose fat left over from Christmas. 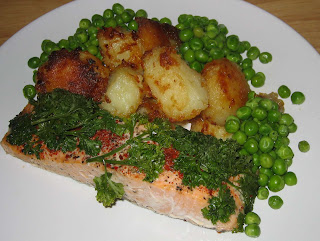 Posted by Caramella Mou at 11:26 No comments:

This is the famous "brun sås" that goes so nicely with Swedish meatballs. Literally it means brown sauce.
I have a large back of powdered stuff used in restaurants and it's slightly quicker to do, so I use that, but before I got access to the powder, I used the following recipe. It is from my home economics book, which it is for one portion only. The main advantage is that it won't have any nasty E numbers.

Method
This is assuming you are going to use the gravy along with the meat you fry. Now for the Swedish meatballs, they come ready made from the shop and frying them in a non-stick pan doesn't give any fat to speak of, so I'd suggest using some butter. I'll give it a go next time I make meatballs and extend this post if needed.
Posted by Caramella Mou at 19:28 No comments:

One thing about my Mum's recipes is that one base can become several different dishes, I'm sure I've mentioned it before. This is one a like a lot. The mince mixture can be used either for meatballs or meat loaf. I think the meatloaf is more of a show off piece.

Kept in the fridge, the meatballs will last longer than the meatloaf, but both can be frozen.

When you slice the meatloaf, you'll get fancy eggs, mushrooms and carrot shapes in the middle. For a more everyday version, the eggs, mushrooms and carrots can be diced and mixed in with the mince just before making the loaf. The vine leaves are quite salty and give a nice flavour to the meatloaf, so I recommend you use them if you can. The meatloaf can be served with rice or boiled potatoes and bechamel sauce or Greek yogurt. 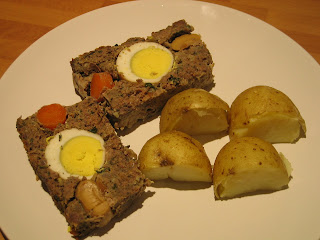 I personally prefer potatoes. I think Hasselback potatoes would also be good for a dinner party.

For the meatballs, a tomato sauce is nice, I'll add a recipe in a later post. I think ratatouille would work as well.

Posted by Caramella Mou at 10:14 No comments:

Lundulph and I went to visit my parents in Sweden and I've picked up a couple of new recipes.

Tonight I made one of them. Unfortunately I didn't watch my Mum make it and she wasn't too sure of the amounts, so I'm trying it out while I add some ideas from myself. So the amounts are a bit approximate. 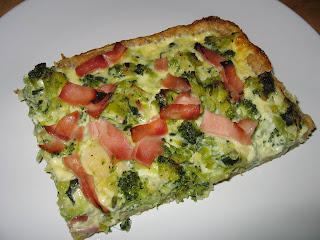 Method
There are two important aspects to the pie crust - first, the melted butter and oil makes it very easy to make the dough, rubbing solid butter into the flour takes a lot more effort. Second, the 10 minute pre-baking ensures that the pie crust will remain crunchy. If the fillings are done on top of the raw dough, it'll go soggy, possibly not even bake properly.

Adding the ham was my idea and it worked quite nicely. The wholemeal flour is optional and can be swapped for plain flour. My Mum didn't give any indication as to how much flour is needed. I thought 6 dl in total seemed OK, but I wasn't able to roll the dough. This could be due to using a bit of wholemeal or too much or too little flour on the whole. It was easy enough to just press into the baking tray.

Also tomato slices can be added on top and grated cheese.

Update 20th January 2007: My Mum has very kindly taken the time to measure the amounts for the pie crust and I've updated them above. The dough is not supposed to be rolled, but pressed into the baking tin, just as I explain above. Make sure it's thin and to make sure it doesn't crack, prick it with a fork here and there.

Posted by Caramella Mou at 21:55 No comments: