This is Shrove Tuesday and it seems that in English speaking countries people eat pancakes. In Sweden it's called Fettisdagen (fat Tuesday) and people eat special buns called Semla, which are filled with marzipan and whipped cream. My experience with these has been hit and miss, so I really like the English tradition.

Now, pancakes. In Sweden they are eaten traditionally on Thursday after a lunch of pea soup. They come with strawberry jam or drottningsylt ("queen's jam") which is made on raspberries and bilberries/blueberries. And of course whipped cream. Most school kids and many adults tend to skip the soup part.

In England, Lundulph has told me, pancakes are eaten with just sugar and lemon juice, which is surprisingly nice.

In Bulgaria, you have pancakes for breakfast and the ultimate is with home made white cherry preserve. This preserve is such that the cherries remain whole, so that you can line them up on the pancake, then roll it and work your way through the cherries. Mmmm.

This year, Lundulph had to work late on Tuesday, so we postponed the feast to Wednesday. And it was a feast, Lundulph could barely move afterwards and neither could I.

He also said that it's a bit silly to put a recipe for batter in the cook blog, but I'm very proud of it because I've worked it out all by myself, without any outside influences and it's taken time to master all parts of the procedure. Though that's probably because we only have pancakes once a year. This recipe gives just over 6 pancakes, enough for two people to really pig out.

Method
The above amounts don't take long, but I recommend that the oven be preheated on low and that the ready pancakes are kept warm until all are done. They taste so much nicer when they are warm. And the crucial thing is to fry the pancakes on high heat and use a little oil for each one.

Now for the serving part. Last night we had a happy merger of Bulgarian and Swedish traditions. White cherry preserve (my Mum made some especially for us last year) and whipped cream. Also I used full milk, because it's the greasiness that makes it taste so nice. And I got Gold Top whipping cream. This is another interesting thing. The milk from cows from the Channel Islands, like Jersey and Guernsey, has a higher fat content than on the mainland UK and in old fashioned milk deliveries, the bottles would have a golden cap to differentiate from the regular silver ones. Well, they also make whipping cream and it is actually quite yellow in colour too. I whipped it with a little icing sugar, 1 tbsp per 1 dl cream. And here is the result, it was ever so tasty. 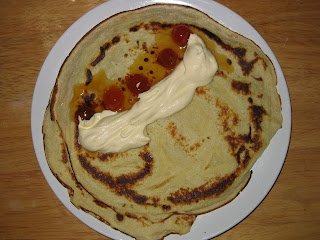 Posted by Caramella Mou at 09:08 No comments:

This is the third week of making lots of soup to take with me as lunch to work. I must say it's great. The story behind this soup is that it's the only meat soup that I would eat as a child. And Lundulph can eat it without having to go hungry an hour afterwards. 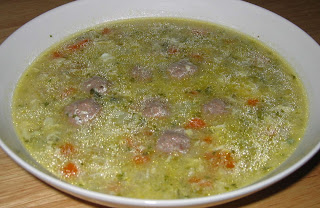 Additional to be done after the soup is off the heat.

1.5 dl cold water
1 tbsp plain flour
Since I don't like any form of celery, I never buy it, but I had some Jerusalem artichokes and I put one big one in instead.

Also, I had 500 g of minced meat, so I used 2 egg whites and used both yolks in the additional first variant.
Posted by Caramella Mou at 10:18 2 comments:

Lundulph has been asking for an apple pie for ages and I was originally going to do Delia Smith's recipe, but I can't be bothered with making a pie crust, so I decided to do the crumble instead.

Today I made one with apple and blackberry and one with just apple. I have two square pyrex dishes where the amounts below fit perfectly

Method
The apples I used today are Bramleys from Lundulph's parents' tree. Lundulph had peeled, sliced and frozen them last autumn. I had done the same with some of the blackberries I picked. Because both apples and blackberries are fairly sour tasting, I've increased the amounts of sugar. Generally I'd use dessert apples for this crumble, like Golden Delicious and the amounts can be reduced a bit.

I think this pie would be good with pears or rhubarb too. Some raisins or other dried fruit could be added. Maybe chopped nuts too.

Due to the nature of these pies, serving them won't look very nice, unless they are done in individual ramekins. 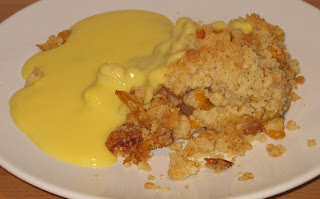 I bought ready made custard, which I heated up before serving, but if I find a good recipe, I'll post it here too.
Posted by Caramella Mou at 14:53 No comments:

Today is general cooking day, so that we have a variety of dishes to eat during the week, without having to cook them after a long day at work.

So I made a pizza this morning, a bean soup is on it's last 15 minutes and I'll make a crumble pie in a moment.

The pizza is the recipe I posted earlier, but like never before, I took the time to make a tomato sauce, rather than just blend the tomatoes.

The good thing about this sauce is that you can add finely diced potatoes to it and it makes a very nice sauce for Bulgarian meatballs.
Posted by Caramella Mou at 14:27 No comments:

Lundulph really likes lamb, have I mentioned that before? Well, I got some nice, lean lamb steaks the other day and cooked them yesterday.


Method
And here is the result: 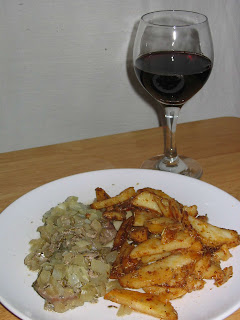 Obviously I forgot the vegetables. I'd bought broccoli, mangetout and baby corn, but I'll have to use them for a stir fry or something.

Both Lundulph and I liked the potatoes so much that we had them for desert as well and put away most of them last night.

Having just discussed the potatoes with my Mum she recommends using margarine or butter instead of oil. This will prevent the wedges sticking to the baking tin. She has found a type of liquid margarine that works very well for this. I'll try to find some and experiment. My own idea on reducing the amount of fat used is to just brush the wedges lightly with oil, then add about 1 dl of water to the baking tin and cover with aluminium foil and then bake them. I think this will partly steam the potatoes and partly roast them. Then take off the foil when they are almost ready and bake them until they get some colour. I'll try this out as well and update the post on the results.
Posted by Caramella Mou at 21:12 No comments: