Yes, it is once again Fat Tuesday and while toying with the idea of baking semlas, and weighing against the fact that I had lots of the buns left over from last year, the lovely ladies at HR (where I work) went ahead and ordered several crates for the whole office to celebrate.

So my mind went on spinning - moving down to a smaller scale, maybe on a lolly stick, hm? 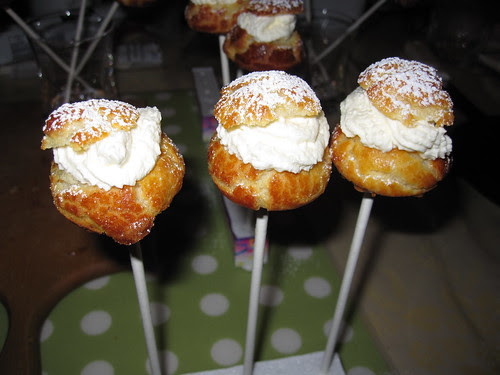 And so I got the idea of a semla pop. And I googled it, there was nothing of the kind.

But of course semla buns are from yeast dough, there is no way I could get them that small. And then be able to scoop out the crumb in the middle in order to fill with marzipan etc.

Then it struck me - choux buns! They pretty much have a hole in them per definition. And I wouldn't be fiddling with marzipan, crumbs and milk etc for the filling, just push in a small pinch of marzipan, squirt a little whipped cream, put the lid on and dust with icing sugar. The whipped cream, was just that - whipped cream with a couple of tsp of icing sugar added to it.

And that's precisely what I did and even my parents liked them, to the point that we put away the 9 pops I made straight away, leaving barely enough time for photos.

So this is what I did. One batch of choux buns of previously tried and tested recipe. It ended up a bit runnier than I expected, not sure why and as I piped slightly smaller blobs, I ended up with about 75 of them.

Once they had cooled completely, I carefully cut off the tops of a few as the semla lids.

Into the cavity I placed some marzipan, about the size of a hazelnut and pushed a lolly stick through. 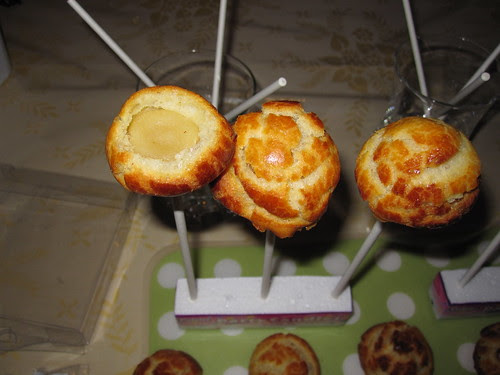 As you can see this time I had polystyrene pieces, which I saved after the candles on Falbala's latest birthday cake. A little Blu-Tack worked a treat.

It occurred to me that I should have cut the lids into triangles, but with my Mum and Dad standing next to me and not really succeeding in waiting for me to finish constructing my little semla pops, I didn't bother.

On further thought, the lolly sticks aren't really necessary, the mini-semlas work quite nicely as bite-sized treats and as it turned out, survived a night in the fridge without problems, which was a massive bonus. I decided not to take the risk of a second night in that cold place and ate the few remaining survivors for breakfast the next day.

My original plan was to make the whole lot into semla pops and take to work, sadly I fell the victim of this year's heavy duty flu and ended up working from home most of last week, so as only bonus I got to keep all the little semlas.

As for the flu, I've mostly kicked it, it seems, but according to the Swedish news, it's the worst epidemic in 20 years.
Posted by Caramella Mou at 19:05 1 comment:

Yes, it is Valentine's Day, in Swedish the day translates to "the day of all hearts". And on a recent trip to our local mall, I spotted these adorable pink heart-shaped sprinkles and couldn't stop myself from buying them. Pathetic, I know. 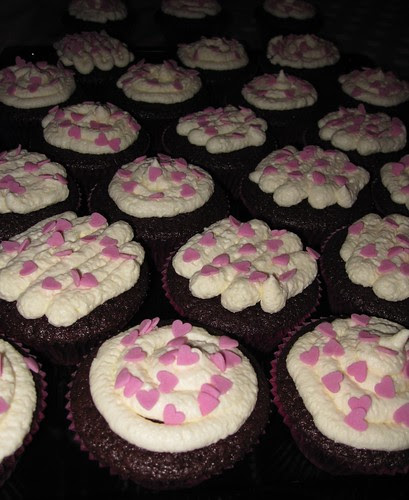 Since the chocolate muffins I made for the cookie monster cup cakes were so fluffy and light and moist and generally extremely tasty, I decided to make them again, but a double dose this time, as I planned to take some to work. You see, my colleague, Long Tall Sally, keeps grumbling occasionally over that I didn't bring any of the cookie monsters to work.

The muffin recipe is here. From the double dose I got 28.

For the topping, I had some mascarpone left over and wanted to use it up, so I searched for suggestions on the vast source of inspiration that is the Internet and found this recipe that seemed very appealing.

I still ended up buying another packet of mascarpone and as I was taking the cupcakes to work, I decided against the madeira.

Once the muffins were ready and completely cooled down, I piped as much cream as I dared. The above amount was actually just right.

The mistake I made was to sprinkle the little hearts immediately afterwards. By the morning they had soaked up some moisture from the cream and had started dissolving. Such a beginner's mistake to make. 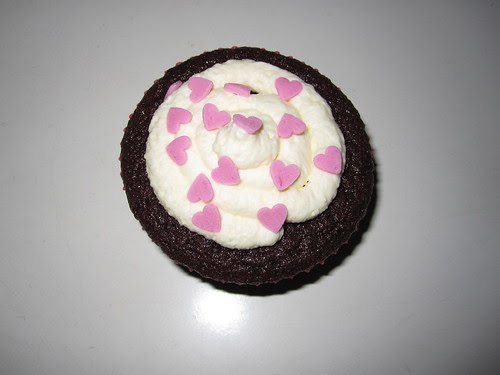 Then came another problem - transportation. My friend Patsy has invested in a special carrying box, but there was no way I could borrow it now. Gah! So out with all ice cream boxes and then fit in as many as possible without destroying them. I managed to take 14 with me to work and they certainly seemed popular, despite they were pink and dissolved. In fact, Long Tall Sally asked to take all of them.

As always, my piping capabilities leave a lot to be desired, but the mascarpone cream was fantastic and combined very well with the muffins. Definitely a repeat treat.
Posted by Caramella Mou at 18:04 No comments:

Yesterday it was my Mum's birthday and after some discussions we agreed to make a tiramisu cake for her. 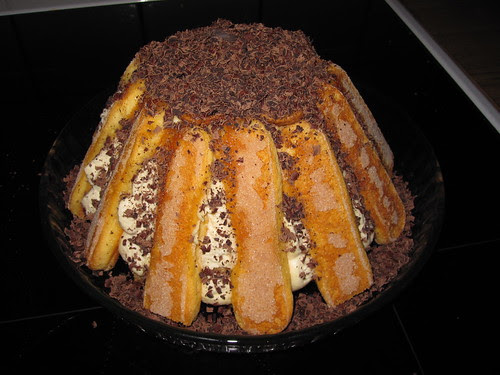 Discussing further, I mentioned that I fancied trying a particular cake shape. My Mum disagreed - she wanted a BIG cake. But when I came to make it, she was busy doing something else, so I took the opportunity to do what I'd decided to do anyway.

The cake shape in question is a giant brioche basically, but made from pyrex and is also useful for a Charlotte. Another thing on my to try list.

The recipe for the mascarpone cream comes from a book on Italian food, something I purchased for my Mum at least 20 years ago, long before the people of Sweden knew what pesto is.

The below results in quite a lot, if you're making portion sized tiramisu, only do half of this, it should be enough for 8 - 10 people.

Because I wanted this thing to stand and not collapse like my other creations, I opted to keep some of the ladyfinger biscuits dry. This worked, but the cake felt a bit on the dry side, so should perhaps have dipped some of them.

I also think the balance between rum and Cointreau was off - too much rum, not enough Cointreau, and so it felt quite boozy and not in a good way, at least I didn't think so. Next time I'll adjust it - maybe equal amounts would be better.

I also had quite a lot of mascarpone cream left over, so I made 6 portion glasses with a ladyfinger each.

Looking at my photos, I should have saved the cream and used it to make the outward appearance a bit smoother, before sprinkling the chocolate.

Needless to say we put away half of this on the day of celebration and my parents worked through the remainder on the following day.

But I'm glad that my idea worked and that the cake was able to stand on its own.
Posted by Caramella Mou at 18:39 No comments:

While I was a housewife in 2010, I followed several blogs and gathered quite a lot of interesting recipes. More than I have had time to try out. 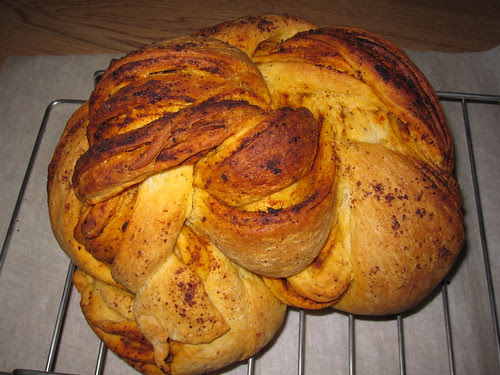 One of these comes from TheFreshLoaf and is a bread recipe from the Caucasus. The photo there looked so pretty and the technique seemed quite intriguing, I'd even gone to Borough Market to get hold of Sumac, a spice I'd never heard of before.

I haven't baked for some time (it took forever to eat all the cupcakes!), so I thought I'd finally try making this fascinating bread.

Despite relatively thorough preparations, it turned out that I didn't have all the listed ingredients and had to improvise.

Although my roll was fairly long, it appears it wasn't long enough and I need to practice the braiding and see if I can work out a different way of doing it that will give a more attractive result. There was no way I could bend it into a spiral shape, let alone getting it to fit into the springform in any way at all, but anyway, I continued.

I let it cool on a wire rack after it had finished baking and it still didn't look very appealing. My Mum thought it looked like a kozunak,
the way they sometimes do them in Bulgaria. Except that this was far from sweet.

But when I cut it open, it looked like this 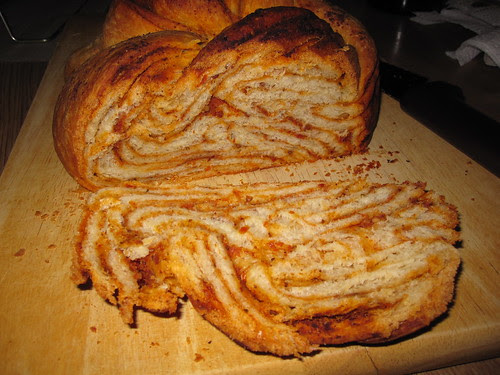 and I was kind of sold on it. So pretty!

Taste-wise it was quite OK, there seemed to be a persistent smell of vinegar around it, and sumac also having a sour flavour, maybe that added to the whole, but it wasn't obvious in the taste, just the smell.

I'll try this again sometime, but with traditional pesto and make sure to roll even longer, so I get a nice braid.
Posted by Caramella Mou at 20:39 No comments: