Last week-end, the English side of the family got together to celebrate the birthdays of my younger brother-in-law Dylan and my oldest niece Lou. There I found a pile of old lifestyle magazines, which had recipes, so I had to review them thoroughly and found this one from Jamie Oliver. 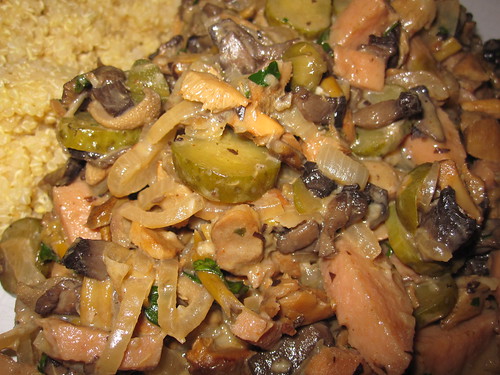 I'm not really a fan of his, and generally I do my best to avoid his work, but having been to Sweden a couple of weeks ago to visit the Chocolate Festival (in Swedish) and to pick mushrooms with my Mum, I've been keeping an eye out for mushroom recipes and I felt compelled to read this one through.

I thought it sounded so good, that I also e-mailed it to my Mum, though I suspect she might just use it as inspiration. I , on the other hand, was determined to try it out, since I brought home a lot of lovely mushrooms, which my Mum very kindly cleaned, parboiled and froze in handy amounts for me. The mushroom season was a bit late this year, I guess due to the very dry Summer, and we didn't get too many mushrooms while I was there, but in the past two weeks, Mum has been sending me photos of her crops each day and it's barely believable how many she's been finding.

As per usual, Lundulph is keen to eat healthily, but every time he tries to go vegetarian, he's even more hungry than usual, so I decided a pure mushroom dish will just not cut it. And since I'd brought back a lovely falukorv from Sweden, I decided to add some of it for extra proteins. And I sort of doubled the amounts, so that we'd have enough for a second meal.


First a couple of points - I describe how to parboil mushrooms in my post on vegetarian lasagne. The mushrooms my Mum and I mostly picked were yellowfoot, which are surprisingly filled with water, given their size, so parboiling is a very good idea and on days of good harvest, my Mum will actially pour out all the released liquid during the parboiling, otherwise it would take forever to wait for it to evaporate. Thus the volume reduces dramatically and is a good space saver. Also, the cooking time is reduced, in fact they are OK to eat after the parboiling without further cooking.

Next, the falukorv is also pre-cooked, so only needs to be heated through, again shortening the overall cooking time of the dish. Frankfurter-type sausages would be a good replacement here.

I didn't manage to set the whiskey alight, so I'm not sure how that would alter the flavour, but it worked fine non-flambéd. I used Jack Daniels whiskey, we have it in case someone asks for a Jack Daniels with Coke, so I thought it would be good for cooking with.

I would have preferred this dish with rice, but I forgot to put it on when I started cooking, so made quinoa instead, as it takes half as long.

Lundulph did enjoy this, more than I expected, he's not a fan of Frankfurter-type sausages, so avoids them when he can, but this one was well received.

I've recently discovered an online shop which sells Swedish foods, in addition to Ocado. It's called Totally Swedish and is a bit on the expensive side. There is some overlap in the range between them and Ocado and there are still items I'd like to have, that neither carries, but still, it's good to know they both are there, if only for special occasions. I should probably make a habit out of checking for new shows that sell Swedish food.

Posted by Caramella Mou at 07:38 No comments: