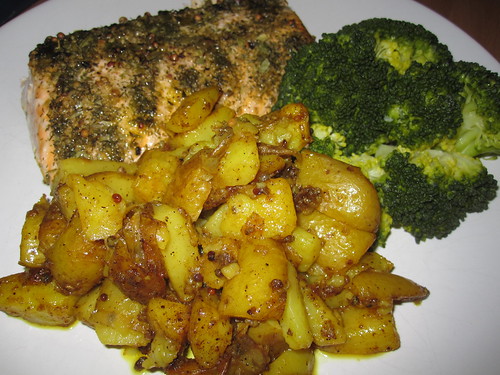 Sprucing up boiled potatoes is not something I've thought about in the past, I like potatoes, so it's never been an issue. However, you can always tell the difference between freshly boiled potatoes and ones that have been reheated, so sprucing them up a little makes sense and is quite a good idea, I think. For example the dillstuvad potatis I made a couple of years ago, would work very nicely. Another way is to just fry them in a little butter to heat them through, which is what my Mum does (not that I can remember though). A third alternative is something I came across a few days ago and decided to try out straight away - Bombay Potatoes from the BBC website.

As it was St Valentine's Day, we had these lovely potatoes with foil baked salmon, which this time was sprinkled with two different herb mixtures for fish and steamed broccoli. Very yummy!

A note about putting mustard seeds in hot oil - in the original recipe it says "pop", but what you actually get is "jump out of the pan and all over the kitchen", this is why I recommend putting a lid in immediately after adding them to the oil. So when I put my mustard seeds in, they all jumped out immediately and I had to try and catch them and put back in the ban again.

The fish herb mixtures are from the Krusmyntagården in Visby, Sweden, where we visited a few years ago and also took my parents and my sister last year. It's a really nice place, high up on the cliffs of Gotland, overlooking the sea, with a glitzy shop with all sorts herb and spice related articles, a lovely restaurant that does a great buffet lunch and a very pretty herb garden to wander around in and look at what different herbs look like. The first fish herb mixture I have contains dill, tarragon, lemon balm, thyme and coriander seeds. I'm not sure what the second one contains - definitely salt, but it's also ground finer, so it's hard to tell what's in it and they don't seem to have it on their website any more. I'm guessing oregano, basil and spearmint perhaps.

Posted by Caramella Mou at 11:11 No comments:

And it's time for semlas once again, yay! This year, I wanted to make mini-semlas and take into work, but as it's my brother-in-law Roger's birthday, I decided to make a semla cake as well and take along to the celebrations. I decided to use the the recipe from 2014 for the buns. A mixture of equal parts of plain and super strong flour worked splendidly.

I've heard of semla cakes, so I did some searching on the internet, but the ones I found were all basically a cake-sized bun done up like a semla. I didn't like the look of them and I guessed they'd take forever to bake. Instead I opted to do regular sized semlas but baked together in a circle.

I made the buns on the day before. For the cake, I took out 8 pieces of dough, to make the regular sized semlas. The remainder I turned into 40 mini-semla buns. I shaped the 8 pieces into balls and placed in a round baking tin, lined with baking paper. They didn't touch originally, but after proofing they had grown to the grapefruit size and were stuck together.

After brushing generously with whisked egg, I baked them a bit longer than for individual semlas, to make sure the middle one got baked. Then I carefully cut the lids off the buns - it's quite tricky when they're stuck together. And I pinched out the middles.

I then prepared the filling with the crumbs, marzipan and milk and wrapped everything tightly with cling film and packed it, ready to go to Roger's birthday party.

Once at Roger's place, after dinner, I put together the semla cake, by distributing the filling

After that, I piped the whipped cream and put the lids on and dusted with icing sugar. No time to cut the lids into triangles and one of the lids had cracked in transport sadly. Needless to say, the cake disappeared incredibly quickly.

I'd also cut the lids off the mini-buns, but I didn't pinch out the middles. Instead, I made the filling from the mini-semlas of 2014. Marzipan and whipping cream (but not whipped).

On Tuesday morning, I got up early and spread a little of the marzipan filling on each mini-bun, piped a rose of whipped cream over it and put the lids on. No time for breakfast, but straight in to work. Again, these turned out to be a great success and several people had seconds. My manager even came over to my desk three times for a mini-semla. One colleague tried to resist having one, claiming to be on a diet, but caved in on the Wednesday and was wondering if there were any semlas left. But semlas are for Shrove Tuesday only, so he'll have to wait to next year now...

Posted by Caramella Mou at 11:39 No comments:

Last week we ran out of bread. Normally I keep well on top of this and do a batch so that Lundulph and I can have toast on the week-end, but I've been rather busy at work and also a course I've been doing in the evenings as well as some DIY that I really should have sorted out back in 2014, so there was never a good time.

So, I decided to try my hand at a quick soda bread. These featured in last year's Great British Bake-Off and looked well worth making, though I have had serious reservations about the concept for a long time.

Looking through my recipe collection, I had a couple of soda breads, but they were flavoured and I just wanted a really basic loaf, so I picked up Paul Hollywood's recipe from the BBC website.

As I read through the recipe, my heart sank a little - it calls for buttermilk. Not something I keep in stock. I've tried it once and didn't like it and left it at that. But there is lots on the internet about how one can go about substituting this. The website I found pointed out that the really important thing about buttermilk in recipes is the acidity, so replacing with regular milk requires adding some thing acidic. So here goes.

The whole thing took less than an hour. I took the bread out after precisely 30 minutes and it seemed a bit soft, but it was nearly bedtime, so not much choice. Paul Hollywood recommends eating on the day of baking. Lundulph had it the following day with his soup for lunch and said that it was quite nice, with great shaggy texture, but it felt a bit damp, so I'm guessing I should have baked it for a few more minutes. Possibly a bit more salt too.

I sliced and froze the loaf, it worked really well toasted, in particular with butter and jam.

On the repeat a week or so later, I baked for 40 minutes, which made a difference, but it was also not as fluffy as the first one.

Posted by Caramella Mou at 21:41 No comments: