Last week my sister Bip visited for a long week-end and being a tea aficionado and a big fan of Bird & Blend Tea Company, she'd booked us both to a tea blending class. This was a very nice experience and in addition to learning lots about tea and creating our own mixtures, the trainers provided a lot of useful tips, one among these was the cold infusion of their Enchanted Narnia tea blend with coconut milk. Now, how could I possibly resist this? This tea blend tastes of Turkish delight and is very pretty to look at in its dry form.

So without further ado, I put 8 tsp of the Enchanted Narnia tea into a large jug and poured in 1 litre of coconut milk over the tea. Now, this tea mixture has lots of dried rose buds and they bobbed up to the surface, so I had to stir for a few minutes to get things mixed in a little bit. Then I covered with cling film and left the jug in the fridge at least overnight.

The next day, I strained some of the cold infusion into a glass and tasted it. It was a very nice, though the coconut of the milk was still the dominating flavour and it tasted way too creamy to drink just like it was. I decided to leave the mixture for a further 24 h in the hope that the Turkish delight flavour would develop further. It did and I gave some to Lundulph to try. He thought it was nice too, but again commented on how overly creamy it seemed to be.

And so it struck me - why not use this to make a panna cotta? A quick search cropped up this recipe that seemed very promising. I made some changes to the ingredients's list and I deliberately didn't heat up the infused coconut milk, so that the flavours wouldn't change - a hot tip from the chocolate course I attended a couple of years back.

This turned out absolutely delicious. I suspect regular milk would work just as well. Sadly I forgot to take a photo.

To follow, I decided to try the cold infusion with hazelnut milk, however this wasn't as nice, the hazel flavour was just too overpowering. So I've been using it in my coffee and it tastes different, but rather nice I think.

Posted by Caramella Mou at 09:48 No comments:

For our anniversary, Lundulph and I decided to go on a mini-break to the New Forest. Lundulph made the arrangements and on the first night at dinner, he decide to go vegetarian and ordered the celeriac steak, commenting that it must be magical, as it cost almost as much as a meat steak. As it turned out he liked it, but was upset about the fact that the amount of calories in it were almost nothing compared to a real steak, again not really fair, as just because someone wants to reduce their intake of red meat, doesn't mean they also want to forego the calories. But he liked the taste, so I decided to try and make it at home. It really didn't look that difficult, but as it turned out there is a trick, which the recipe I chose didn't mention. I did also have some things I wanted to use up, so I did some swaps, but I don't belive that caused the failure of my homemade celeriac steak.

What failed with the above was that my steaks hadn't fully cooked and gone soft, Maybe I cut them too thick. I hadn't realised how hard a celeriac is and it was difficult to peel, it was a bit knobbly and too large for me to hold safely, so I recommend using a paring knife, rather than a potato peeler. Cutting the steaks evently was even trickier and I haven't given it much thought of a different way to achieving a better result - unfortunately I don't have space in my kitchen for a slicing machine, that would probably be ideal. My mandolin is not quite up to the job either, even the thick slices would be a bit too thin I think, but I might try it.

Otherwise Lundulph thought it was a decent first attempt and as he re-heated the remaining steaks in the microwave, they got softer and better, so the cooking times are approximate and it's important to check the softness. The other thing Lundulph was surprised about was that at the restaurant, the celeriac didn't taste like celeriac. The one I made did and it's not his favourite flavour, though he'll eat it, unlike me, who'll take the time to carefully remove every single piece from my plate. I'm guessing that once fully cooked, celeriac will lose or at least reduce the strong flavour it has in its raw form.

Posted by Caramella Mou at 18:57 No comments: 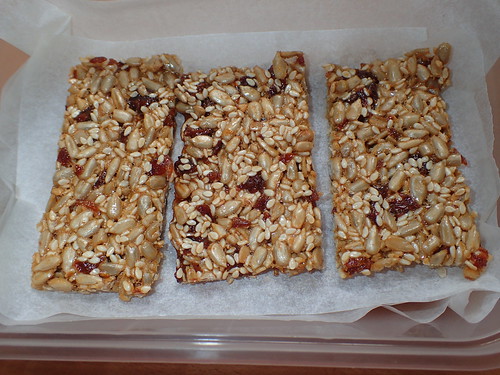 My Mum regularly sends me recipes she comes across and this one I received a while back and haven't taken the trouble to make. Which is a pity, because it was rather good and very easy too. Lundulph's eyes went sparkly when he tasted these.

I used a large egg and I think this was a bit too much, so the snacks didn't go completely solid and were still sticky at the bottom, even after cooling. So I layered them with baking paper in the cake box.

They were not too sweet and the combination of sunflower and sesame seed is really good. The honey I used has a pretty strong flavour, so the sultanas weren't too noticeable. They did taste a bit of the egg, again, I suspect it's because I used a large one, but this didn't detract from the overall experience at all.

I think this base recipe can be varied quite a bit with using different dried fruits and even replacing some of the sesame seeds with other seeds or nuts. As I said, Lundulph was well pleased and I suspect these are a lot less unhealthy than shop-bought sesame snaps and such like.

Posted by Caramella Mou at 14:45 No comments: