When I posted my recipe for Bulgarian bean soup a while ago, I mentioned that I'd try the slow cooking method. Well I did last week. I soaked the beans for some 16-17 hours, then I cooked them for about 14 hours and although it tasted rather nice, I now know what the "bean effect" is. I've never had that before, so this is definitely a method I won't be using again on this recipe. Pressure cooking only!

As an attempt at getting a feeling of Summer, Lundulph and I have been eating a lot of salad over the last couple of weeks, so there hasn't been anything interesting to write about.
Posted by Caramella Mou at 11:39 No comments: 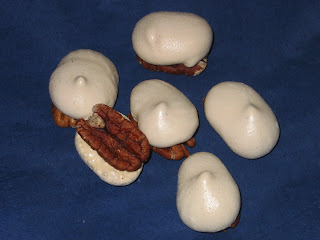 Last night I made meringue, something I haven't done for 15 years. In Bulgaria meringues are called "целувки" which translates to kisses. Swedes call it "maränger". The idea of meringues on top of walnuts may not necessarily be Bulgarian, but that's the only place I've encountered it in the form below. And because they are so small, it's so easy to eat too many.

I followed the recipe for a Pavlova in Delia Smith's big book, but I discovered an inconsistency in my edition - the recipe says 6 oz (175 g) caster sugar, but looking at the conversion table at the beginning of the book, 1 oz = 25 g. This would put the recipe out by 25 g. In fact 1 oz is 28.34 g. A search on the internet for more information on meringue, it perspired that actually it's the proportions between the two main ingredients - egg whites and sugar that matter. It should be 1 part egg whites to 2 parts sugar per weight.

Traditionally in Bulgaria only icing sugar is used, but the recipes I found called mainly for caster sugar. Also there was talk of French meringue, Swiss meringue and Italian meringue. The ones I made are the French variety.

Method
I wasn't too sure about the soft peak stage and didn't whisk long enough before starting to add sugar and so my mixture was a bit softer than planned and didn't stay in shape after piping it.

For the piping, I always mean to buy a proper piping bag and never get around to do so. Instead, I've saved the different piping caps that come with the colourful icing tubes I use for my gingerbread houses. Then, I take a regular plastic bag for food storing, cut a small hole on one corner at the bottom and put the piping cap through. I place the bag in a tea mug and drape the top edge over the mug, then transfer the meringue mixture into it and pipe away.

I'm keen on trying out the Swiss and Italian meringues, so watch this blog.

Here are some of the links that I found interesting:
Description with pictures and explanation of the science behind meringues
French meringue
Swiss meringue
Italian meringue

Update 15 July 2007: Needless to say these disappeared alarmingly quickly - they were so fluffy and light, it's was easy to just keep eating from the tin. I'll make more next time!
Posted by Caramella Mou at 19:36 1 comment:

Today we had French toast for breakfast. In Sweden it's called "fattiga riddare" which translates to poor knights. In Bulgaria it's called "пържени филийки" translating to fried bread slices. I've done this a couple of times before, but then I'd only dipped the bread in lightly beaten eggs and ended up with two slices heavily infused with egg and 3 with barely any on them. Lundulph is great and never complains. But today I followed a recipe from my Bulgarian cook book and it was delish! 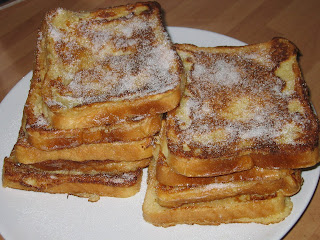 We had ours with jam - white cherry that my Mum made last year, my quince jam and my blackberry jam. They can also be served with just caster sugar and a little bit of ground cinnamon.

In Sweden and Bulgaria at least, the idea with this dish is to use up bread that has gone a bit stale. We don't have any stale bread as we slice and freeze ours, so I bought a small loaf of thickly sliced bread from the shop. It was very soft and fresh and worked just as well.
Posted by Caramella Mou at 08:45 No comments:

I've been meaning to bake for a long time, and today I got a chance. I'd planned to make these ages ago, along with other things. Unfortunately I started with what seemed to be apple turnovers, which turned out to be a mistake. Not directly horrible to eat, just didn't work very well. Lundulph thought they were like a McDonalds apple pie, but baked in the oven instead of deep fried. We still have a copious amount in the freezer and Lundulph is kind enough to eat one every now and then.

Anyway, these turned out very good - just like I like them - crumbly, yet chewy. I guess the dough is a bit like cookie dough. I just didn't make them ridiculously large and didn't put any bits in them.

I had one to try them out (amazing how long it took for them to cool down) and the second one just sneaked up on me and made me eat it. I swear! 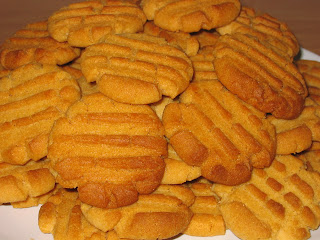 Update 15 July 2007: We (Lundulph mainly) finished these a couple of days ago. Apparently they are good dippers, he says. After the lovely chewiness when still warm, they went a bit too hard for my liking and I suspect it was the butter that did it, so I'll try another batch with margarine and see if that makes things a bit softer. A further thing to do is perhaps increase the amount of baking powder.
Posted by Caramella Mou at 18:55 No comments:

My good friend HairyLee suggested some time ago an alternative to a barbecue, to go the to butcher's and ask for a leg of lamb, but get the bones cut out, then just slap it on the barbie and some 6-7 people will be sorted meat wise.

So finally, I brought up some courage and went to our local butcher and placed an order. It seems that this is quite a popular thing to ask for, because they had ready made ones and a choice of marinades. But I'd made plans, so I got a plain one.

And yesterday I picked it up, nicely vacuum wrapped and all. It was a quite large lump of meat, so I made loads of marinade:

I had originally planned to make the marinade the evening before, in order to get all the flavours out, but didn't get a chance to do that. Still this worked like a treat and the meat was VERY tasty.

Now the story behind the yogurt marinade. When I lived in Bulgaria as a child, a diplomat from Afganistan lived in the flat above us with his family. His wife and my Mum were very good friends. Now in Afganistan, goat and mutton are often cooked and to get rid of the smell that these types of meat often have (and that many people, including me, find unpleasant), they marinate in yogurt. This seems to remove the smell and tenderise the meat too.

I didn't have a chance to speak to my Mum to ask for the exact recipe, so the above is an improvisation. And it worked ever so well, the meat was super! Sadly we waited too long for the barbecue to burn out and had to finish cooking it in the oven. 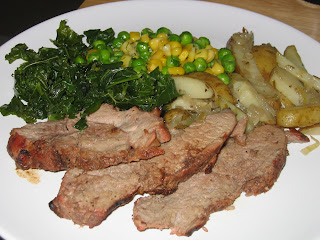 But it didn't stay this way for long...
Posted by Caramella Mou at 20:53 No comments: