After various discussions with Lundulph, we've decided to stop our project to have different birds for Christmas each year. It's not sustainable, so we've settled onto goose. As before, I ordered the smallest possible goose from our butchers and went for the Mary Berry recipe I used a couple of years ago.

I did make a change this year - I baked the mushrooms, rather than fry with butter and also used single cream for them, rather than double cream. Still as tasty, but less fat on the whole.

The new thing was the dessert - chocolate profiteroles decorated to look like Christmas puddings. I spotted this recipe in the queue at the till in the supermarket and as luck would have it, it was on their website as well.

I haven't made profiteroles for a while and certainly not ones with cocoa powder in them. So I wasn't entirely sure what would happen. It felt like they didn't quite puff up as much as regular ones. I'd also not baked ones where I made holes in the bottoms and continued baking to dry them out, though I know Mary Berry recommends this technique. What I got was some dark brown profiteroles, which weren't too puffed up and seemed pretty dry.

I also made the fondant icing decorations a day before as I didn't have the right cutter. I regret not buying one, it would have made life a bit easier.

However, it is not impossible. I rolled out my icing and cut a large circle with one of my cookie cutters. Then I used one edge of another cutter shaped like the digit "3" to get a sort of oval shape. Continuing with the "3" cutter, I cut out the little bits all round the edge to make the oval look like a holly leaf. I should have made 48, but once I reached 30, I gave up as Lundulph came home and wanted dinner.

I assembled the profiteroles while the goose was baking, so the kitchen was pretty hot and I had to make sure to keep the cream as cold as possible. I recommend this on the day before as well.

Because the profiteroles didn't puff up, there wasn't room for much cream either and Lundulph and I had to have some extra cream on the side as the profiteroles were pretty dry and tasteless on the whole. More sugar is definitely needed, both in the dough and the cream, I'd say. So although they were quite pretty, they didn't taste very nice. Maybe I should try making regular profiteroles and dip them in chocolate, rather than use cocoa. Still, it was a nifty idea and Lundulph was happy, as he's quite keen on profiteroles.

The goose on the other hand did. I didn't prick the skin when I first put it in the oven, so after about 30 minutes when it was time to turn it round onto its back, it had puffed up and looked like it'd explode. So as I turned it over, I punched holes in the skin all over and the fat oozed out at speed. What we ended up with eventually was a goose where the meat came off the bone and there was no need for carving at all. The texture was very good.

I also splashed out on tender stem broccoli, which was really tasty too, I must remember that for next time.

And so we had a rather successful Christmas dinner, the two of us, and this year's main thing was that we finally got to eat it in our dining room on our brand new dining table. After all these years, we are now at the point where we can use all the rooms of the house, having always had one room being in a state of renovation and crammed with building materials. But no more. Well, not much anyway.

Merry Christmas Everyone!
Posted by Caramella Mou at 22:05 No comments:

Last Sunday, Lundulph and I ended up doing a lot of things and completely forgot to have mulled wine and something freshly baked with the second Advent candle. So to compensate a bit, I decided to try something new this time (and a recommendation from my Mum).

"Vit glögg" translates to white mulled wine. I've only come across it in Sweden and I don't believe I've ever had it before. This particular recipe includes almond liqueur and since we've had a large bottle of Amaretto for ages, this would be a great opportunity to use up some of it.

A note about the wine. The recipe stated sweet wine, but the wines in the supermarket were marked as "dry" mostly. There were a couple of "very dry" and a couple of "medium dry". Luckily I spotted one that was marked "medium" and that's the one I went for. It was made from moscato grapes, which I guess would make it sweet enough for the mulling. I suspect if I'd found an even sweeter wine, with all the sugar I added it would have been impossible to drink.

With this, Lundulph and I had some lovely chocolate panettone, which we bought from our local farm shop. It's nice that this has become so popular and is easy to get hold of. The first time I had panettone was in 2002. It was a present I bought for Lundulph in our early days of dating. We both liked it a lot and wanted more, but I had severe trouble getting hold of it in the UK then.

But this white mulled wine was quite a hit, so it might be added to our Christmas traditions. We didn't put any raisins or blanched almonds in the cups, I don't think it's needed.

Posted by Caramella Mou at 17:24 No comments:

The second thing I made for the first Advent Sunday is again from a very old recipe in my collection and looked quite nice in the photo.

These biscuits did not turn out like in the photo and I know the recipe was wrong as it listed finely chopped almonds at the top of the ingredients list, but then never mentioned when they were to be used. I'd hoped to use some of my ground almonds, but I didn't dare add them at a random place in the baking process and instead just stuck whole almonds on top. In the photo they looked like a saffron/orange version of my fudge biscuits, but that's not what the result was. Still, they were tasty, but I'll try to adjust the fudge biscuit recipe next time. I also need to actually measure the orange zest next time, I sort of guessed at 2 tsp and I think I added more than that.

The biscuits were nicer when still a bit warm actually and I'll try to warm them up in the microwave when I have some next. I suspect they'd be good for dunking in your tea/coffee, if that's what you like, they seem to be pretty solid.

Update 15th December 2014:
I had a good read-through of the recipe leaflet. Indeed there are issues - the almonds as mentioned above for sure. But also I noticed that the photos and the recipes order were "quirky". I was looking at the wrong photo, so no wonder my biscuits didn't look anything like the ones on it. In fact, once I found the actual photo, I established that mine looked prettier, which was very pleasing. What Lundulph and I also discovered is that once you start nibbling on them, it's really difficult to stop...

Posted by Caramella Mou at 09:17 No comments: 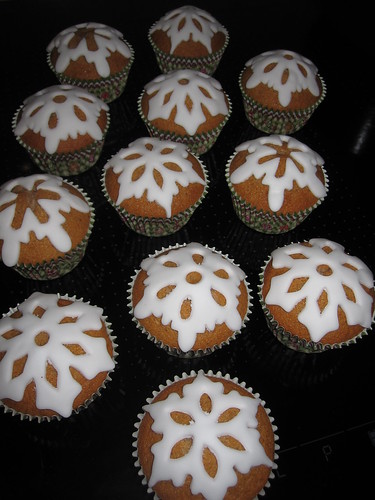 This year, I've decided to experiment a little with the traditional Christmas flavours and so decided to try my hand at gingerbread muffins. I didn't bother researching recipes, instead I opted for one in my collection. It's not a gingerbread sponge per se, but rather a "spicy sponge cake", which had the same spices I normally use for gingersnaps with the exception of ginger.

It's also a recipe of a basic batter with variations, something I always find appealing. I've made the nut sponge cake version on many occasions, it's very good for cakes, however, this time I made one bad ingredient swap. Please read on.

I was not able to resist a new set of cookie cutters in the shape of snow flakes this year and I use them to cut the icing.

The ingredient swap I made was to use semi-skimmed milk instead of single cream. I believe this is the reason why the muffins ended up so very dry, however, I'll try to remember this for when making cakes which will be moistened with syrup. But in this case this was not a good idea. Perhaps I could have compensated by increasing the amount of butter, but I didn't. I also think I need to make adjustments to the amounts of spices - the ginger was a bit too strong for me, however I think the other spices need to be increased a little, rather than reducing the ginger.

I am quite pleased that the amount was right for 12 muffins, which Lundulph and I have been putting away at a decent rate over the week-end, since it's the first Advent. Lundulph has been really good and hasn't had any alcohol during the whole of November, so we had non-alcoholic spicy fruit punch instead of mulled wine, as we lit the first candle. 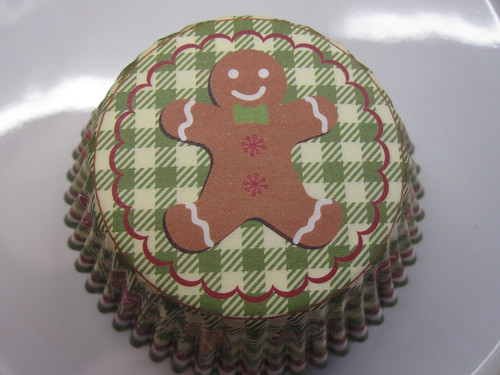 For another variant of this cake, swap 1 dl of flour for 75 g of ground nuts and bake for 40 minutes if making a cake.

Update on 2020-12-19:
I've made these again, this time using single cream and although I didn't have ginger to include in the spice mixture, I was very pleased that the amounts once again were enough for 12 muffins and that they all turned out with nice dome shapes like the original time. However, I didn't have ready to roll fondant, so I found this recipe for glace-icing, which worked a treat:

Method
Sift the icing sugar, then add 15 ml water and stir together, add some more water to make just runny enough to pipe without too much effort, but thick enough to start setting beore it's run off the top of the muffins.

I piped spirals on each of the 12 muffins and the above amount was just enough for that. Lundulph is now about to devour them.

Posted by Caramella Mou at 08:52 No comments: