Our rhubarbs have once again sprung to life with a vengence and I've been searching for things to do with them. Last year, I was able to harvest 3 times, despite the two flower spikes that also came out. I could have even harvested a fourth time, but resisted, mainly because I had a whole drawer full in the freezer. This year, there were three flower spikes, which I decided to cut off, even though it doesn't look like they are having any draining effect on the plants themselves. I also ripped out a few of the largest stalks in order to try this recipe, which I found a few weeks ago.

Actually, I've already tried this recipe, with some of the frozen rhubarb, and I can honestly say, I wholeheargedly agree with the gushing commments on the originator's website. This was a really scrumptious recipe. And today, I made it with fresh rhubarb, as per the original.

Now, since I don't force my rhubarbs, they are green, not bright pink like the ones in the shops. Possibly they are also a bit more fibrous. So both my original batch as well as the one I made today became a pale yellow in colour, because of the egg yolks and butter. So in the first batch I added some food colouring, a bit too much in fact and it went bubble gum pink. Not very pretty. I also had more than 300 ml juice, and added some additional 90 ml, which made it a bit runny. But the flavour was fantastic - sweet and tangy and really fresh and both Lundulph and I could have happily eaten it straight from the jar. But I had 5 eggwhites to use up, so I made my angel food cupcakes and used the curd as topping. Just like with the lemon curd originally, this was a very good combination, apart from the runniness.

In today's batch, I resisted the temptation to add the surplus juice and it's now cooling down on the cement slab in the larder. Lundulph said to skip the colouring, he thought the pale yellow is pretty enough.

A thing I noticed is that the curd matured over time, so some of the smoothness disappeared towards the end of the two weeks it lasted. I must try freezing some and see how that affects it. It was fine with the strawberry curd I made last year.

I've also set a little bit aside and frozen it, to see how that fares. I also looked back at the other curd recipes I've tried in the past and I'll try to use the one I made with strawberries last year, it has a fraction of the butter, so should hopefully be healthier.

Posted by Caramella Mou at 22:10 No comments:

After holding off for a few years, I'm back watching Ann Reardon's wonderful videos and when I saw this one, I just couldn't resist trying it out. 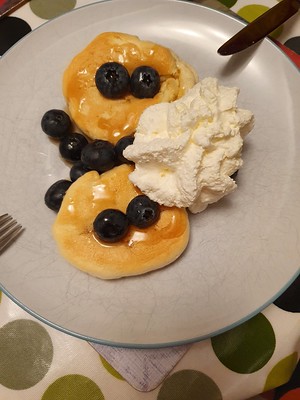 The video actually looks at a fake video on how to make these fluffy things at home and also provides a recipe that really works.

As today is Waffle Day in Sweden, Lundulph and I are following our tradition of eating pancakes and although this type of pancake requires serving immediately after cooking, we had a 30 minute break after dinner, while I made these. But I'd prepared as much as I could before dinner and made sure to let the oven pre-heat while we ate our main course, so it was definitely a success.

Additionally, today Lundulph got his first injection of the Corona vaccine, so this was an extra treat for him and his cheeks did go rosy and his eyes went all sparkly.

I pretty much followed the recipe and the video. It calls for egg white powder, which I've never used before, so it was quite interesting. Ann Reardon also recommended using baking powder to help with stabilising things, if you're a beginner baker. I'm not, but I used it just to be on the safe side. I'll try without it next time.

Comparing to the video, my egg yolks were a lot paler and so the pancakes ended up paler and I was worried that they hadn't baked properly, but I was wrong, they were beautifully puffed up. Though I ended up with lots of left-over mixture when I used the ice cream scoop, so next time, I'll transer the whole mixture to a piping bag, so that I can control both shape and size more.

I only bought blueberries for these and I used maple syrup. It worked very nicely. When I served them, Lundulph wondered if these were Yorkshire puddings, because he thought they smelt a bit like that, but he cut them open, spread a lot of blueberries on top and covered with maple syrup and whipping cream. Since I got my whipping cream dispenser a couple of years ago, we've been having a lot more whipped cream than normal, because it's such fun to squirt onto our various desserts.

Posted by Caramella Mou at 20:02 No comments: