I've been working my way through a left-over bag of giant shop-bought marshmallows and wondering how difficult it would be to make them myself. My standard procedure in these cases is to watch videos on YouTube, the site turned out surprisingly helpful and pointed me towards "zefir" or "zephir". This is a Russian type of marshmallow sweet, which looked so beautiful and seemed quite easy to make, so I got on with this, especially since I had strawberries left over from the Rhubarb Dream Cake and a lot of agar agar in the cupboard following my experimentation with jelling liqueurs at Easter. I guess all my recent searches for Russian recipes is what prompted the zefir suggestion. I liked this one best, though I took inspiration from others as well. Below adapted amounts to fit with the strawberries I had to use up.

I quite liked both the texture and the flavour, though I think the traditional size was a bit too big, as they are very sweet. So next time I'll aim for bite-size rosettes. Lundulph wasn't too impressed, he thought they were missing something and suggested they'd be better as decoration of a cake rather than to be eaten on their own.

Here they are on the dining table:

However, I gave a few to my Russian friend Byala and her response was to say it's the best zefir she's ever had and that she'd eaten almost all of them in one go.

Update on 2019-07-20: During our recent trip to Bulgaria, we found a shop selling Russian food and I bought a packet of pink and white zefirs - I'm pleased to say that I did get them right for texture and sweetness, though of course in the humid UK air, I needed 2 days for the drying and they were still rather sticky. I think Sweden in deepest Winter might be ideal, with its super dry air. My parents weren't too excited either, my Dad didn't like the texture much. I'm wondering if these could be piped on a plain and not too sweet biscuit to offset all the sugar. I must experiment.

Posted by Caramella Mou at 20:54 No comments:

My Mum is well aware that we have surplus rhubarbs and whenever she comes across a recipe with rhubarbs, she sends it over. The latest crop is called "Rabarberdröm", which translates to rhubarb dream. I made this for a family barbecue at brother-in-law Roger's place for Father's Day. It didn't turn out pretty, but was very yummy.

Instead of mixing regular sugar and vegegel, jam sugar or preserving sugar can be used - it already contains a jelling agent, so should work similarly. The amounts for the compote result in a lot of it, not everything needs to be used and also, the sponges and the compote can be made a day in advance and stored in room temperature.

I only have one spring form for cakes and an adjustable cake ring, so I used that. However, I hadn't thought things through very well, so couldn't quite fit both in the oven at the same time and ended up tilting the spring form slightly. This transferred to the finished sponge and so when I built the cake, it barely stayed upright.

I also suspect the oven temperature might need to go down a little, the meringue ballooned, but luckily it sank down again.

Still it was very intriguing to bake a sponge with a meringue on top and in one go, I've not come across this before. It makes for an extremely sweet, light and moist cake.

Posted by Caramella Mou at 07:09 No comments:

I have a lovely colleague from Russia, Byala, and one day on the train home from work, we compared traditional summer foods in Russia and Bulgaria. It seems Bulgarians aren't the only ones partial to cold soups like tarator, Russians are too and Byala told me about two of them, svekolnik or holodnik and okroshka. 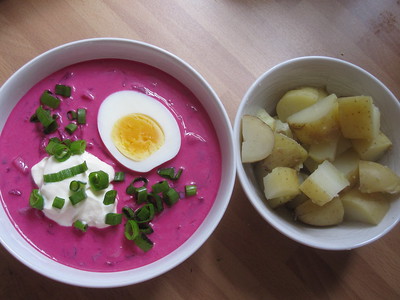 I've been waiting for a hot day to try these out, but after the lovely Easter week, it looks like we won't be getting any of those for a while, so I decided to make the svekolnik, since I had a couple of beetroots in the fridge screaming to get eaten.

I didn't spend much time in researching recipes, but I found this one that seemed quite appealing and put together my shopping list for the other ingredients last Saturday. 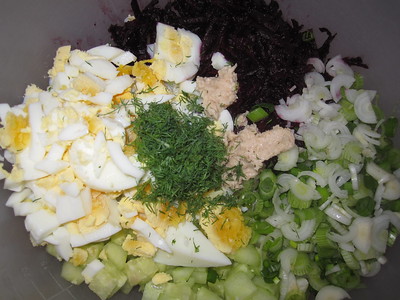 During the baking of the beetroots, the most wonderful smell spread through the house, Lundulph said it reminded him of the smell at his Nan's when they went there for Sunday roast dinner. I did waste a lot of energy running the whole oven for two beetroots, I think it should be possible to do a tray of them, covered with aluminium foil and use for other things. My sister Bip said they would be really nice with goat's cheese.


A couple of notes - the website said to put in 1 tbsp of horseradish sauce, but the embedded video said 1 tsp. I thought I'd err on the safe side, so just put a tsp in, but I think a tbsp would have been OK. I also think capers or fresh tarragon would be rather nice.

We started out by having the warm potatoes on the side, but soon Lundulph tipped the potatoes into the soup and it combined very nicely too. It was surprisingly filling, but if you want even more protein in the soup, you can add some diced ham.

The only thing is that it isn't as quick to make as tarator, but it's a nice alternative.

Posted by Caramella Mou at 09:03 No comments: