This apparently is a fairly common way of serving potatoes in Sweden. Oddly enough, the first time I had it was this past Christmas. Patsy, who's known me for almost 20 years was massively surprised that I was unaware of this delicacy. So, time to rectify.

"Dillstuvad potatis" translates to "potatoes stewed with dill" and is a very nice way of sprucing up boiled potatoes, not to mention that they work very well with salmon.

After a brief search on the internet, I decided to try this recipe (in Swedish).

Since I've recently re-stocked the freezer with salmon, I coated a piece with chilli sauce, wrapped it in aluminium foil and baked for 30 minutes at 200 °C. Yummy! And we'll try the left-over potatoes with some of my home made meatballs tonight.

Posted by Caramella Mou at 09:32 No comments:

Some time ago, I came across this site, while searching for vegan recipes. It's in Swedish and describes how to make a lovely pudding with chia seeds. I really liked the photos, I think that's what got my attention originally. So in recent days, I've been purchasing the ingredients to try it out. Now obviously things in the shops here in the UK are different from the things in the shops in Sweden, so I was prepared to improvise my purchases as well, this time and a good thing I did, as it turned out.

Method
Stir together all ingredients and distribute into five small serving bowls. Cover with cling film and put in the fridge overnight or for about 8 h and it's ready to serve.

The original recipe uses unsweetened almond milk, but I prefer hazelnuts to almonds, so opted for the hazelnut milk instead. As it turns out, it tastes like Nutella. Bonus! I'll have to try it out with coffee. Can you tell I've never had hazelnut milk before?

Actually I ended up changing the recipe quite a bit - I skipped the saffron and swapped the dates for agave nectar, but it turned out rather nice. Lundulph certainly liked it and so did I. I made the mistake of only making four portions of the above amounts and they were way too big, but it was so very tasty we both ate our portions and are now wonderfully stuffed.

Lundulph said it reminded him of the semolina pudding he used to get at school. I thought it smelt a bit like rice pudding.

And as the first lot was so successful, I immediately followed up with a second batch:

This second batch turned out quite nice too - the almond milk has a more subtle flavour than the hazelnut, but worked very nicely with the cinnamon. Also, I think it was a bit thinner, because the chia seeds had swollen a bit more than in the first batch. So much so, that Lundulph was wondering if we were having frog eggs for dessert. And since the pudding doesn't really go solid, I thought it would be easier to just leave it in the jug and take out servings as needed. The real danger is that I might scoff the whole lot straight out of the jug, if I get a sugar craving.

Lundulph's resolution is to eat as healthily as possible and he scrutinises every packet of food we have. And he established that the almond and hazelnut milks were made of about 2 % nuts, which he thought was a bit outrageous. So next, I'll try to make my own. However, thinking about how the nut milks are made, I wonder if the 2 % is for the final product and not what amount of nuts has been used to make it. As I understand the principle is to blend an amount of pre-soaked nuts with water, then filter the liquid. Which of course removes most of the nuts and a very small amount should be left. The tricky bit here would be to actually keep the pre-soaked nuts for milk making - the nuts are very tasty to eat after soaking overnight, but I'll definitely give it a try. If nothing else, it's bound to taste nicer when freshly made.

Next I'll need to think of different flavourings and perhaps adding some fruit.

Posted by Caramella Mou at 09:11 No comments:

Last time I went to our butcher's, they were advertising pork and even had small booklets with recipes for the customers to take home. Which I did, and there are a few interesting recipes there that I intend to try out. However, I decided to make a curry tonight because I still have a substantial surplus of grated ginger and roast garlic in the freezer and I am after all trying to clear it out.

Thus, I flicked through my "Fat Free Indian Cookery" book by Mridula Baljekar. My thought was to just pick any curry and use pork with it, however there was a pork section and the second recipe was for pork vindaloo. As it also turned out, I only needed two ingredients - pork and cider. I had all other ingredients. Besides, Lundulph quite likes cooking with cider, so had no objections to this.

However, I completely forgot to read through the whole recipe and when I finally started cooking, it was actually way too late to follow the instructions. But the curry turned out quite tasty anyway, so I'm rushing to write it down, before I forget anything.

Actually, I used cloudberry vinegar, which I bought from IKEA because it seemed intriguing. However, I didn't like the way it tasted, so I've been looking to use it up somehow and this seemed like a good opportunity.

Because of the mustard seeds and vinegar, Lundulph thought I was making "brown sauce". The curry turned out very nice indeed, despite not following the instructions in the recipe. Perhaps the meat could have benefitted from either marinating or cooking a little longer, it felt a bit tough and dry, but overall the vindaloo was really tasty. I served it with boiled potatoes, which worked quite well. Despite the name vindaloo, this dish wasn't extremely hot, though I guess this can be regulated by using higher or lower amounts of chilli flakes and mustard seeds.

Posted by Caramella Mou at 21:20 No comments:

I've been hankering for bread with lots of seeds in for a while, and finally I got round to baking some. It turned out rather nice, so I want to write down the ingredients, so I don't forget.

I think I could have left it to prove a bit longer than I did, it hadn't risen as much as I expected it to. Perhaps because of all the seeds. The oven spring left something to wish for as well, however, the breads turned out very tasty indeed. Because of the onion seeds, I recommend savoury applications, however, I had a slice with maple syrup and that worked well too. Yum!

Posted by Caramella Mou at 20:58 No comments: 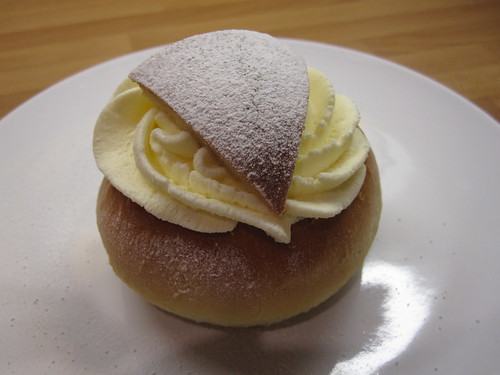 Yes, I've spent most of the day baking semla buns. And although my parents sent me a new recipe for this year's trend in this department, Lundulph put his foot down and demanded the traditional stuff and implied that anything else is plain wrong. Thus I will try out the mini-semla buns with ganache some other day...

Again on Lundulph's request, I followed my first recipe, as it has been the more successful so far. Now reading through the recipe and what I did, I didn't feel I could replicate my rescue activities, so I tried to keep as close as possible to the original recipe. However, now that I'm in the process of digesting my first semla for this year, I've come to a number of conclusions, so I'm writing up a new post on this subject.

Today I remembered to use strong flour, however, I have the Canadian Manitoba flour which is very, very strong and really good for bread. But these buns need to be light and fluffy and this type of flour turned out too strong. Which is why I've written a mixture of equal parts plain and strong flour, I think it would give better results.

Next I've used a lot more milk for the filling. Not only because it's hard to blend together, but also because last time I ran out of filling and it's supposed to be enough for all the buns.

The marzipan I used today was really posh with 60% almonds. This means a very strong almond flavour, almost like Amaretto. Generally, 50% almonds marzipan is recommended for baking. The stuff I've seen in the supermarket is around 35% - 40%. It's a question of taste of course, lower percentage almonds means higher percentage sugar and thus sweeter, possibly also softer to work with. It may well be worth making marzipan yourself.

Finally, now that I have a new and fancy electric oven, I baked at 190 ° C for 15 minutes, which gave good results. Possibly I could reduce the temperature to 180 ° to get slightly lighter buns.

On the whole, I'm quite pleased with the result, and so is Lundulph - he had two semla buns and I've no idea how he managed to fit them in, after a good portion of pork vindaloo.

We now have 7 buns left, I gave most of the buns to my lovely neighbours.

Update 5th March 2019:
This year the freezer is full and no way I can fit a load of semlas in there, so I made a third of the above recipe:

The amount is so small, I had to knead it by hand, which was a rather nice exercise after work. This resulted in 8 buns, much more manageable.
In order to get the ⅓ of an egg, whisk well with the pinch of salt, then weigh and use a ⅓ for the dough and the remainder for the glazing.

Update on 22nd March 2020:
This year, I halved the recipe as I didn't fancy kneading by hand and thought the Kitchen Assistent machine would be able to cope. I was right.

The machine was just about able to cope with this amount, though I did have to help a bit, by scraping down the walls. I made 10 buns at 62 g each. The really big excitement this year is that I got to try out my whipped cream dispenser - a Christmas present from 2018. It's great fun, but I do need to practice on how to use it. Also mixing the whipping cream with the icing sugar should be done before pouring it into the canister, it hasn't mixed well and I suspect the last of the whipped cream will come out super sweet.

Posted by Caramella Mou at 20:48 No comments: