A couple of weeks ago, Lundulph and I went to an apple tasting event. We're looking to replace our old apple tree that had to be cut down this year and want to get a variety or two that aren't available in the shops.

We tasted quite a few and made a shortlist of 6. Luckily some farmers were selling some of these apples as well, so we bought loads, for further evaluation. In one crate on the side I spotted the biggest quinces I've ever seen, so I bought a couple.

Together with the fruit from our flowering quince I decided to make quince jam, one of my favourites. Thanks to the two bird feeders I put up in the spring, the bluetits left the pretty red flowers of our quince in peace. So there was lots of fruit there, just about the size of golf balls.

So last night, I sat down to peel the quinces. Now quinces are very hard, even when they go off, and they are tricky to peel too. The flowering quinces were too small, the ones I bought were too big for my hand. So I peeled the two large ones and picked out the biggest of our home grown ones and binned the rest. My hands are still sore.

Then I discovered that they are very hard to cut as well, so I ended up hacking off as much of the fruit flesh as I could. I did make a poor choice when I used the small vegetable knife for this, a large meat cleaver would probably have been easier. But the quinces were so fragrant, they smell a bit like physalis (Cape goosberry). We tried them, at first bite the aroma is there in the flavour, but very quickly you feel the tartness and your mouth goes all dry. At this point it was bedtime, so I covered them up and put them in the fridge.

What you need for quince jam:

Now quinces are full of pectine, so much that the jam will be like a rather solid jelly, so regular sugar is recommended, not jamming or preserving sugar. Also, during cooking, the jam goes bright orange or even red, it'll almost look like you've put food colouring in it. The fruit bits go soft and translucent. 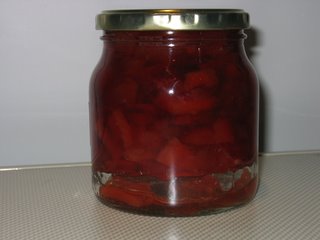 As you can see, once it's cooled, it's rock solid. I had to give it a good shake, to make it go down to the bottom of the jar again.

The recipe also applies to apple jam, but I've never eaten that and have a feeling that it might not be too good an idea. Apples should be either raw or in a pie or crumble.
Posted by Caramella Mou at 10:49 am