In preparation for Christmas, today I made Swedish "pepparkakor", what is called ginger snaps in English speaking countries. The Germans call it "Lebkuchen".

In the English ginger snaps, there is only ginger, whereas in the German and Swedish, there is also cinnamon, cloves, cardamom and possibly some other oriental spices as well. The Swedish name translates to pepper biscuits and from the brief search on the internet, I found out that the "pepper" although meaning black pepper, actually was used as a collective name for a mixture of a number of spices - ginger, cinnamon, cloves, cardamom, nutmeg... And yes, at some point during the middle ages it seems that people also put black pepper in the mixture, but not any more.

Certainly these are ancient biscuits and there are records from the days of the Renaissance of them and they haven't changed that much today.

Pepparkakor are readily available in Sweden and the number of people still bothering to bake their own may well be dwindling. The German ones are more like cakes, i. e. softer and sometimes dipped in chocolate. IKEA spreads them all over the world and up to last Christmas, I'd regularly buy a couple of tins for nibbling through December, along with a ready made gingerbread house (pepparkakshus). Ready for putting together, that is, so just gluing together with melted sugar and decorating.

But now I have a brand new oven, which calls for baking my own. And having not made any for about 20 years, I thought a dress rehearsal would be in order, particularly since I've never made the dough before, they sell dough in Sweden too. I remember my Mum made the dough the first year in Sweden, but it was a struggle and so we moved onto the ready made dough. And I think in later years, we'd only make large hearts for decorating the windows, we'd buy the small ones.

So here is the recipe I tried and I have already lots of ideas for next year. One word of warning - I wasn't able to find ground cardamom in the shops in the UK and perhaps I should have gone to an Asian store, but decided to grind my own. When doing this, the flavour is a lot stronger, I didn't compensate for this, so the biscuits are a bit on the cardamom-y side. The other spices are available ready ground and I think are sufficiently flavoursome. I have adapted the amount of cardamom in the recipe below to accound for grinding it at home. If you do find ready ground, then use 1 tbsp. 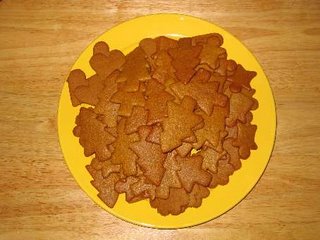 250 g unsalted butter or margarine
2 dl light syrup
2 dl water
4 dl caster sugar
2 tbsp ground cinnamon
2.5 tsp ground cardamom
1 tbsp ground cloves
1 tsp ground ginger
1 tbsp bicarbonate of soda
13 dl plain flour
I have memories of rolling the dough being a nightmare and I know now why - first we rolled it on the work surface in the kitchen, cut out the shapes, then had to prise them off and place them on the baking sheets. This pretty much results in mis-shapen biscuits. Second, the dough from the shop was not loose enough. So very important to roll straight onto the baking sheet if they are non-stick coated. If not, use greaseproof paper. And don't be tempted to add more flour - when the dough is first mixed up, it should be like a very thick sponge cake mix. It'll be OK after a day in the fridge.

The hot tip is to roll a bit thicker if large shapes are being made. A favourite is to make hearts large enough to just fit one on a baking sheet. Make a hole in it, so it can be hung in a red ribbon. 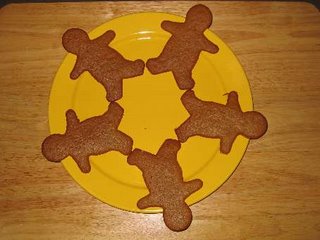 Mix all ingredients well, put in a plastic food bag, cut off a tiny bit off one of the corners and decorate away. If you want, use different food colourings. Also sticking on smarties is a good idea.

The gingerbread women were the first to go in the oven and I didn't bake them long enough, so I'm not including them here. But the two photos show the amount I made with one third of the dough as listed above. The rest I put in the freezer for December.
Posted by Caramella Mou at 22:21