It's rather traditional in Sweden to serve thinly sliced salmon with boiled new potatoes and dill and mustartd sauce. This is a variation on the theme - I fancied making Hasselback potatoes.

The easiest is to buy ready sliced salmon - either cold smoked or gravad. This is a Swedish word meaning "to bury" the fish. This is the old method of curing for preservation where pieces of fish (or meat) were rubbed in with salt, sugar and salpeter and was then buried in the ground. Not sure if this particular method is still followed, when curing, but that's what it is. Cold smoked has a similar texture. Personally I prefer hot smoked, which is not very spread outside Scandinavia, at least I have trouble finding it in the UK and it was nowhere to be found in Germany. It's texture is a bit different, more like tuna, and it can't be sliced.

The dill and mustard sauce I have not yet tried to make, as there is a very nice one they sell in Sainsbury's where they call it just Dill sauce. And do go for the Sainsbury's own, sometimes there is a different brand which costs more and doesn't taste like it should.

Roasting potatoes, e. g. King Edward, enough for everyone. The potatoes should be medium or large sized. 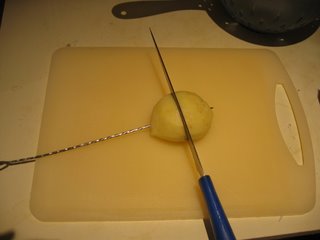 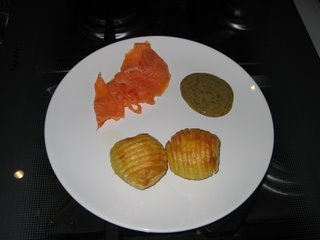 Posted by Caramella Mou at 8:00 pm