The Lussekatt of the Year 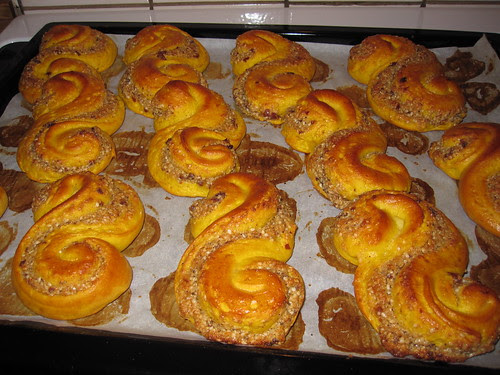 This was the title in my Mum's weekly magazine a few weeks back. These are the famous Swedish saffron buns. I've made these before on several occasions

But this recipe was well intriguing - combining the traditional ginger snap with the traditional saffron bun. So very appealing in my buzzword driven world at work - streamline Christmas into one easily manageable thing to eat.

Reading the details, it's actually not a straight forward combo of the two types of dough, but the ginger snappy bit is actually ground almonds mixed with the traditional spice mixture used for ginger snaps, orange zest and lots of sugar. However, as Doctor Cutie and Bip were invited and are allergic to nuts, I opted to leave out nuts completely and used sesame seeds instead. It worked a treat last year for my macaroons.

Finishing touch
1 egg lightly whisked with a pinch of salt to use as egg wash.

These are best served on the same day as they are made. They ended up fairly big, which my Dad liked, as they were closer to the size of the ones you get in the shops, rather than the tiny ones my Mum normally makes. Another benefit was that the technique of rolling out the dough made the process of shaping so much faster than the normal one, where the dough needs to be rolled into strips, cut to a good length and then shaped.

I served these at my glögg party, but along everything else that was very sweet, I don't think I did any one any favours. I haven't adjusted the amounts above. Also a word of warning on the light syrup. This is the stuff that is sold in Swedish shops and can be replaced by liquid glucose I guess. In the UK I would have used golden syrup, but that is very much sweeter than the Swedish stuff, so I would have reduced the amount by quite a bit.

For some reason my Dad didn't like the final result, he thought it tasted funny. But it seems he is alone in this, I thought they were lovely and it seems that others thought so too. Though they did end up rather sweet and next time I should reduce the amount of sugar in both the paste and the main dough. I did take some to work along with brioches and the lussekatter disappeared a lot quicker than the brioches, despite my boss' heroic work on the brioches. I think he put away 3 with clotted cream and jam.
Posted by Caramella Mou at 22:14