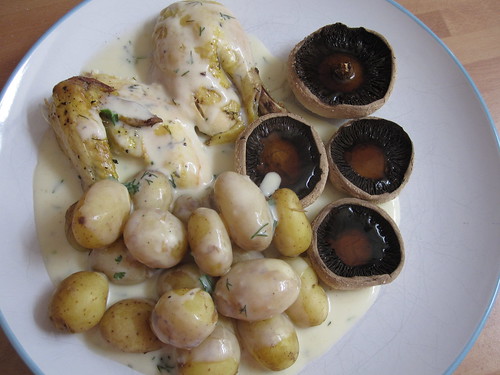 A couple of years ago, a lemon balm plant had seeded itself next to our pond. I like the smell of this herb and left it there. Chatting to a neighbour, she confirmed that it probably came from her garden. What we hadn't realised is that lemon balm is from the mint family, which means it is quite rampant and can take over fairly quickly.

A few years before that, we made an attempt to rejuvenate our little pond and purchased several pretty looking aquatic plants, one of which was water mint. Again, this plant took over the pond and seems to have no issues growing on land either. Lundulph is not too happy about either and I humoured him, by removing some of the lemon balm seedlings in the flower patch around the pond now that we're in a lockdown. Thus I liberated a rose bush, my beloved ramsons and some lovely Welsh poppies.

But the lemon balm got me wondering and googling on what can be done with it. Mostly it is tea, which I tried last week - it was quite nice, but the plant is way too large for us two to use up. I've also read that lemon balm is not suitable for drying. In Sweden it is used as decoration to desserts, very much like you'd do with mint leaves in the UK. It's also nice to put in drinking water now and then as well. But I managed to learn what lemon balm is in Bulgarian, and I searched for recipes, which resulted in this one (in Bulgarian) that seemed decent enough to try. So as it's Sunday today, I made it into our roast lunch. I did some tweaks to the recipe, the original instructions were on the sparse side.

I don't know if any of the herbs permeated the chicken meat, but it was delicious. Lundulph concurs - a small but very nice chicken. The poussins were so tender and juicy. I'm also quite pleased with the sauce. We ate one of the poussins and kept the other one for next week. For dessert we had some of the lovely rhubarb ice cream. I really must start using my garden more and pick the stuff that grows on its own with no effort on my part.

Posted by Caramella Mou at 7:05 pm