As mentioned in yesterday's post, I've harvested the rhubarbs for the first time this year (and I definitely expect one more harvest in the coming weeks) and there is work to be done to preserve it. As also mentioned, I have no pectin in the larder, but loads of agar-agar, so some searching on the internet resulted in selecting this recipe which seemed quite straightforward. 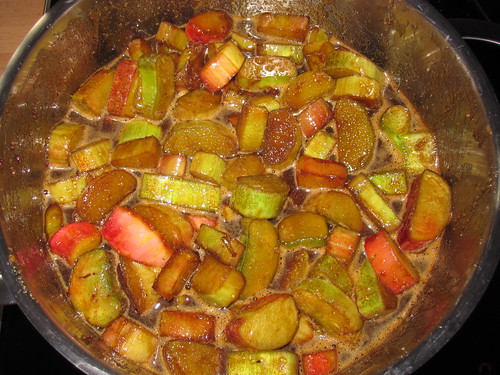 Before listing the ingredients and the method, a note on my activites in the last few weeks. We in the UK have now been under a lockdown for almost 3 weeks and as I'm out of a job as well, I've taken the opportunity to tackle some jobs around the house. One of them is to thoroughly empty and clean the larder. This hadn't been done since I organised it in 2014, which I discovered after copying the clean-out photos to my photo album. This was long overdue and I did manage to fill a rubbish sack with stuff that was out of date or looked suspicious. It is also amazing how much stuff it's possible to fit in there. Now everything is nice and clean and has been shifted to new drawers, with the concept of often-used items are easy to reach, rarely used items are further back. What this means is that I end up going through all drawers for every single thing I need. But I now know what I have and what I don't and I do need the exercise.

In this activity I also established that I have an astonishing variety of small containers with sugar in different forms or stages of refinement. Thus I took this jamming opportunity to use them up. The below amount is a combination of some 260 g soft dark sugar, about ½ dl light cane sugar flavoured with cloves (a gift from brother-in-law Roger after a trip to Mauritius), another ½ dl pink sugar for cookie decorations that I don't intend to use, a further ½ dl of palm sugar and a couple of tablespoons of crystallised golden syrup (didn't realise this was possible). There's no way I'll be able to reproduce this jam if it turns out well.

Because I used so much dark sugar, the jam is quite dark in colour, but looking at the first time I made rhubarb jam, it was pretty dark too, even. 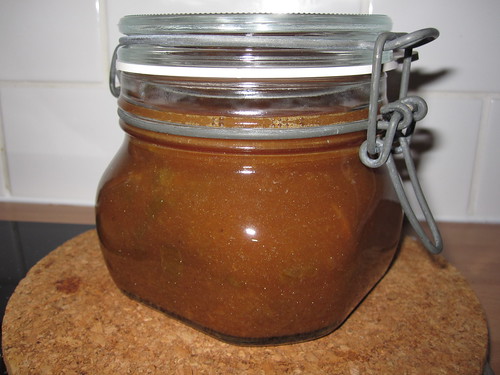 We've not tried it yet, as we already have several other jams "on the go" as Lundulph says and I'm not opening another one until we've finished these.

Posted by Caramella Mou at 1:06 pm