So, the oracles have once again failed to predict the Christmas weather. A couple of weeks back it was supposed to be -5 degrees, then a couple of days ago they said +15. And it has been rainy to say the least. Luckily we have no activities outside the house and are located up on a hill, so very low risk of flooding. But it's still unnerving when the rain pelts down on the roof of the conservatory in Lundulph's parents' house. Oddly enough the ginger snaps we made last week have held together very well, as has the Christmas tree (of the same type I made last year).

I made the traditional Swedish Christmas ham yesterday - this year I got a 3 kg piece "off the bone", that had been cured and smoked and again I boiled it for some 3.5 h and left to cool overnight.

Then bright and early this morning, I removed the fat and followed my glazing recipe from a few years back. 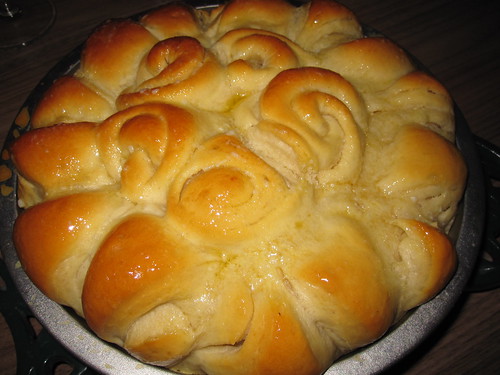 But I also decided to make some bread together with my nieces Lou and Falbala. And it was a festive Bulgarian bread especially for such holidays. Curiously, I came across it at Foodiva's Kitchen. She's done an amazing job of translating the original recipe from Bulgarian.

I didn't need to go through that much as I can read enough Bulgarian to work things out. Foodiva's actually made some changes to the recipe. I followed the original one with regards to the ingredients, but then opted for Foodiva's method of putting the bread together. 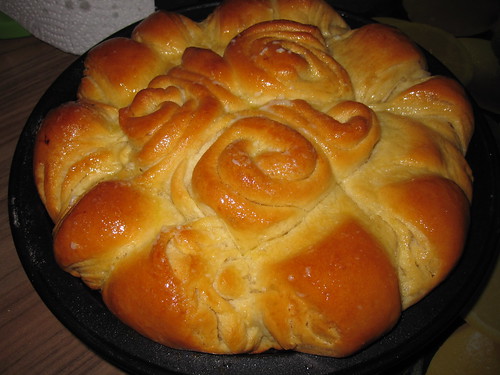 The dough was very soft and nice to work with and Lou made a fab job of rolling the pieces. Lundulph' Mum didn't have a tray big enough for the whole dough, so we ended up making two smaller breads, still they worked out very nicely.

I'll repeat the original recipe here for the sake of completeness and I'll do them in the order they are needed.

In the end Lou did the great job of rolling out each piece. The dough was wonderful to work with, despite being borderline thick paste as I turned it out on the work surface. I suspect I used up a bit more than the 50 - 100 g additional flour stated in the original recipe and it was still slightly sticky when I placed it to rise. But it came together as if by magic and it felt like the gluten was there from the start, so reminded me a little of strudel dough in its stretchiness. 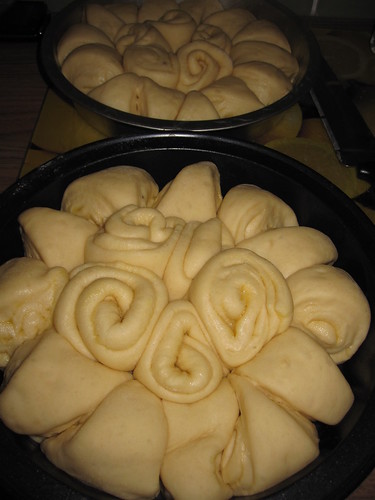 And I was quite intrigued by pre-fermenting the yeast with just milk and sugar. From my readings, if mixing sugar in a dough, it tends to "soak up" some of the liquid, thus making things dry for the yeast and inhibiting it. I was pleasantly surprised to see that in this case the yeast happily fed on the milk and sugar and swelled up to the point of almost running over the edge of the little bowl. It was just over half full when I first made the pre-ferment. 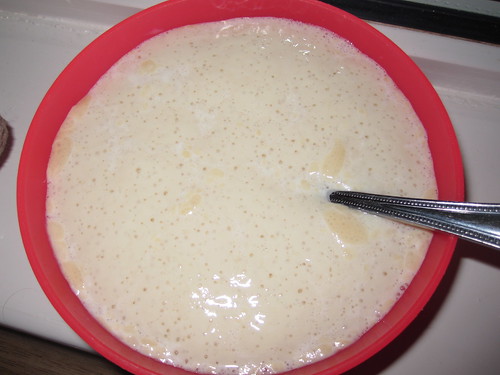 The bread is also quite neutral in flavour, so works both with sweet and savoury condiments and I do enjoy a bread that people can break up, rather than cut.

Another very interesting thing we got to observe is the importance of the colour (and the material) of the baking tin. At random, I picked two tins of equal size. But one was black and the other was silvery in colour. Both breads were baked together in my Mother-in-law's brand new oven, which still bakes evenly throughout. And yet, after 35 minutes, the bread from the black tin had more colour both top and bottom, whereas the bread from the silver tin was quite pale. I've read about this, but never actually experimented. 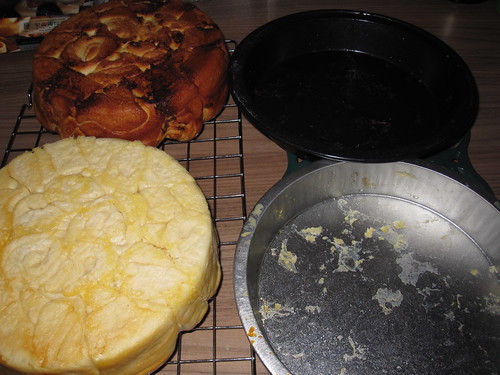 So we broke the bread for our Christmas dinner and had it with home made pâté and hummous and it was absolutely yummy. The texture was very light and fine and the layers in the roll came apart easily.

It occurred to me that I could potentially roll several layers very, very thinly and brush each with melted butter and shape into crescents and would have look-alike croissants. Of course I wouldn't have the same incredible number of layers and of course butter behaves differently when used solid than when used melted, but I'll definitely try it out.

As for the ham, it turned out quite nice, but was perhaps a bit over-done. I forgot to bring my meat thermometer and opted to play it safe, since I couldn't measure the core temperature of the ham. It had also remained fairly salty and was quite crumbly to cut, but was rather tasty and I believe will be very nice on sandwiches. It also looked like the stock it was cooked in would have made some very nice "dopp i grytan", but also this time I didn't get around to make the appropriate type of bread (so called vörtbröd).

Anyway, Merry Christmas to every one!