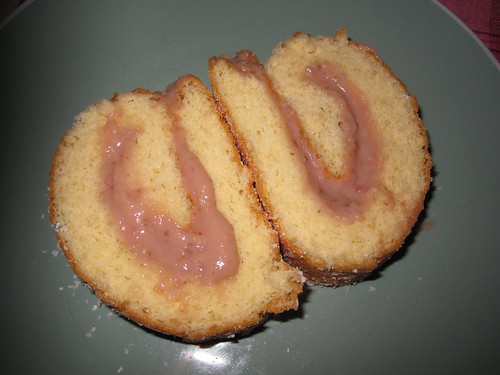 Since the lockdown, my good friend Dr Cutie and I have started having Zoom-fika ever now and then and have been asking ourselves why we've not thought of doing this before now, it's really good to chat about this and that and discuss our latest bakes and ideas. Last time we spoke, I mentioned we always get massive jars with jam from my Mum and it takes us forever to get through, so she suggested using them on Swiss rolls. She says that's a staple for when you get unexpected guests, as it takes very short time to complete. So I decided to make a Swiss roll, it's been ages since the last one.

Following the double batch of strawberry custard I made, I decided to use it as filling instead of jam. When I asked Lundulph if he'd fancy this, his eyes sparkled and his smile went from one ear lobe to the other. And since I've not used my Cordon Bleu book for a while, I decided to use its sponge recipe. This also reminded me why I so rarely use this book, it focuses on cooking techniques, but is relatively vague with the recipes.

The recipe in the book actually stated that the above amount should be for one baking tray, but it was definitely twice more than it should have been. Unfortunately I'd only prepared one baking tray, so one it had to be and I ended up baking it for some 15 minutes due to its thickness. It also was very difficult to roll. Didn't correspond to the photos in the book at all. But it was very tasty and I think with half the thickness in the sponge, it would have been better. Perhaps heat up the custard and add some gelatin to it and prevent it from oozing out too much. Of course this isn't Dr Cutie's quick recipe, it takes a bit more work, but it's well worth the effort to make and serve guests.

Plus, Lundulph was happy and so was I, because it was very tasty and although it seemed to be massive, we got through it quite quickly. Another bonus with 2 Swiss rolls for a larger dinner party.