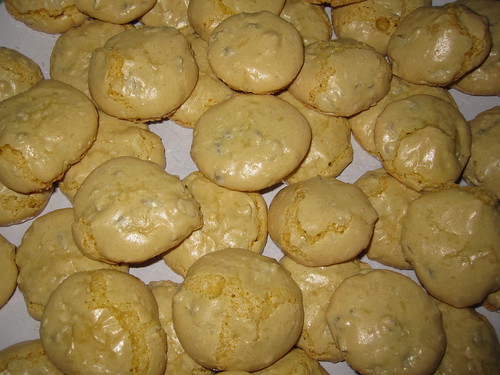 Following my lovely fruit basked cake for my birthday, I had 4 egg whites to be used up. Originally I planned to make them into marshmallow, but some research resulted in the realisation that marshmallows do not contain egg whites at all. So the next thing to do is meringues and I had a vague idea of trying to make them flavoured. I had some lovely orange flavouring and yellow food colour that should have done the trick.

As it turned out, they didn't. I made the Swiss meringue, following a recipe from Lenôtre's book and I strongly suspect the orange flavouring is what did it. It looked quite oily and probably contributed to the collapse of the egg whites. So I urgently started searching for what to do when a meringue mixture just doesn't happen and came across this, which I used as inspiration, in particular the Chewy Almond Macaroons recipe.

What I learned in addition from this exercise is that just using sesame seeds is way too intensive a flavour. This was surprising, because whenever a recipe uses sesame as a spice, I barely notice it and always thing there should be more, but in this case it was way too much, so mixing with sunflower seeds or using ground or finely chopped nuts might be better. The combination with the orange wasn't super, but not too bad either.

Lundulph quite happily ate the lot, I filled up a biscuit tin and put next to his desk and they did go over the following few days. His suggestion was that they should be covered in dark chocolate, so I might try that next time my meringues fail.