Not losing any time yesterday after the bread failure, stopping only to push the dense, yeasty loaf in the bin, I made a second mixture, this time:

This resulted in something half way between a dough and a batter. 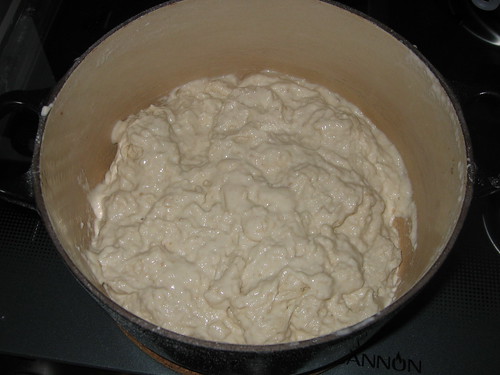 I also ended up leaving it for 23 hours, at which point it looked more like a batter and it was bubbling like a geyser. 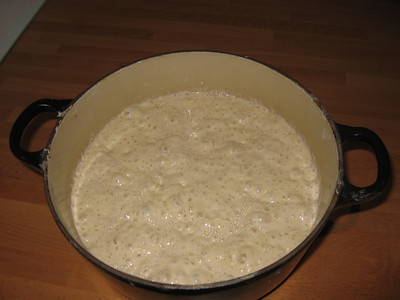 When I saw this, I briefly entertained the idea of binning it and starting once more, but thought I'd pour it out first on the work surface, even more generously covered with flour. You never know, it might be rescued. It glopped out of the bowl and was extremely sticky but most definitely a dough. I dusted more flour on top and carefully shaped it into a square. With my new trusty plastic dough scraper I sort of managed to fold it in three and then 15 minutes later I made the second folding. It just kept flowing out. I made a third folding, because it was nowhere near a cube shape.

When it was time for it to go into the oven, it had spread out back to the original size again and I involuntarily ended up folding it again as I poured it into the casserole dish from the towel, there's no way I could have managed to scoop it up to transfer it.

Baking went well, this is what it looked like when I took it out an hour later. 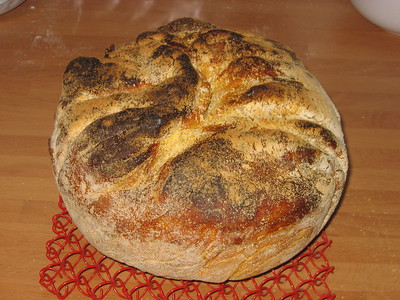 It crackled as I took it out from the casserole dish.

In the mean time, I'd made Bulgarian bean soup. I grilled some Frankfurters and cut up the bread. Just the sound of cutting through the crust made us drool. The crumb was looking very lovely too, lots of big holes and all that. 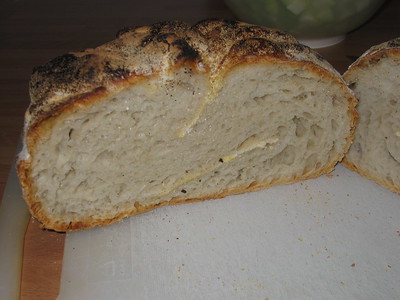 This is definitely a repeat.