As I'd not cooked for a week, I thought I'd start off with something I've wanted to do for a while - a Swedish dinkelbröd (link is in Swedish). It's made of spelt wheat, which apparently is what was used for flour in Medieval Europe. From reading up on this, spelt wheat farming stopped in the early 20th century, but is now making a good comeback and is really trendy these days.

Also, I did some browsing of foodie blogs and spotted this on Wild Yeast - a Couronne Bordelaise - and I was speechless! I've never imagined that such beautiful breads existed.

So two birds with one stone, today I mixed up the bread and made a couronne of a sorts. And I used regular yeast this time, none of the fast acting stuff.

Method
I made the mistake of putting in 2 tablespoons of olive oil, so the dough was possibly extra sticky. Also my dough was almost twice the size as what was recommended in the couronne instructions. And one of the instructional photos seemed so pretty with the bread shaped like a star, I wanted to keep that on top, rather than bake it like a true couronne.

And here are the several mistakes or so I made. I didn't grease up the ovenproof dish before putting the dough in. I forgot to take out the little bowl in the middle and it wasn't really ovenproof.

The bread baked very nicely and after 50 minutes, I took it out and covered it with a tea towel. I always remember my Mum saying that you can't eat bread straight out of the oven, it has to rest for a few minutes "to run around it's field" she used to say. I e the field where the wheat grew, the wheat that was used for the flour. I haven't seen it mentioned elsewhere, so I'm not sure if that's really a thing to do or not, but it certainly makes the crust a bit softer.

But when I tried to get the bread out of the dish, well it wouldn't come out. I tried to prise it out and sadly this is what happened: 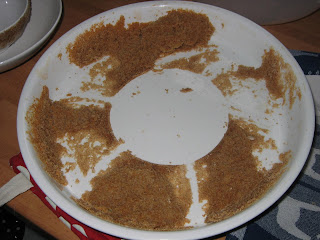 And the bottom of the bread didn't look much better: 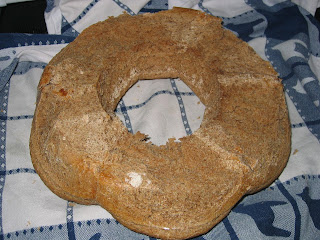 I brushed the bread with an egg in the hopes to make the star shape become more obvious, but sadly egg on dark breads never really works, does it? 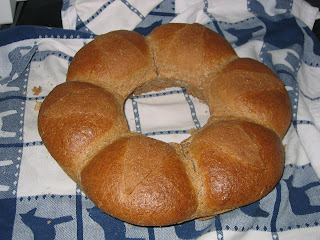 Still, the bread was quite tasty - a bit on the heavy side and rather crumbly as Lundulph discovered when he was buttering his slice. It was rather nice, but I'd need to have a regular wholemeal bread side by side for a taste comparison, I can't tell the difference on it's own.

Rather interesting and I'm glad I tried it out. And I'll definitely need to repeat the couronne, I must get it right, it looked so pretty.
Posted by Caramella Mou at 17:34

Spelt bread, I love it!

If you'd like to try the couronne again, I think you'll have better luck if you flip it out of its proofing apparatus before you bake it so that the points end up on the bottom of the loaf. You can bake it directly on a baking stone if you have one, or on a baking sheet lined with parchment.

Yes, I only skipped the last step - turning the bread out of the rising dish only because I thought the wedge shapes looked so pretty. Still my second attempt worked out a lot better - same dish used, but this time I greased it with a little oil and also remembered to remove the little bowl in the middle.

This time I left the dough to rise in the fridge overnight and although it seemed to work well, the proofing wasn't as successful, though perhaps I should have given the dough more time.

The second difference this time was that I used stoneground spelt wheat as opposed to the wholemeal type and the dough consistency was a bit different, heavier sort of. Combined with the weak proofing, the bread was quite dense and extremely filling.