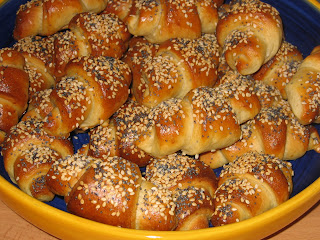 Dish number two is a savoury snack that I want to use as a nibble, instead of the usual crisps. It's a very old Swedish recipe, my Mum used to make these a lot in the past. Even Lundulph tried one.

Method
They can be frozen and reheated in the microwave when needed. Quite tasty when eaten hot with butter. But oh so unhealthy.

The name vitlöksgifflar consists of two parts: vitlök which means garlic and gifflar, which originates from the German word Gipfel, which means peak as in a mountain peak. I think they'd be called horns in English. Not sure how they remind you of a mountain peak, but interestingly enough, a similar type of horns but from sweet kozunak-like pastry and filling made of rose hip marmalade is made in Bulgaria and they are called "kiffli" (кифли) and the word has the same origin.
Posted by Caramella Mou at 3:35 pm