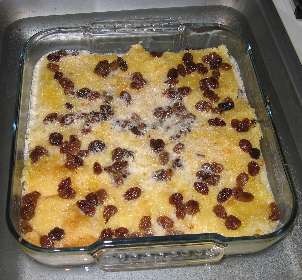 I haven't tried this very English dish yet, I've seen it made on telly and have had certain doubts about it, but some time ago I saw a variant with an Italian twist - use panettone instead of bread - and that just clicked. So today I have made Panettone Bread and Butter pudding.

The original recipe is here.

As usual, I have made small changes.

The main one is that the panettone I managed to find at the end of September (not easy, believe me!) was absolutely enormous. So I increased the amount of custard with about two thirds. I should have doubled it really, but I think I can just about get away with this amount.

Next I got Jersey gold top milk which has 5.2% fat as opposed to regular full milk, which I think is around 3.5%.

Also, buttering panettone is pretty impossible, so I'm sure I used way too much - about 180 g I think, so we'll need to eat a little at a time.

Finally, I didn't have grappa for soaking the sultanas, so instead I used Bulgarian rakia, which is pretty much the same thing - a type of brandy. But it has quite a sharp taste, so maybe grappa is better.

Unfortunately, the recipe doesn't say how long to cook it if it's being done in a large dish, which I did, since I don't have little ramekins yet. Memo to self, put little ramekins on kitchen shopping list. So I baked the pudding for about 25 minutes.

Also I'd forgotten to get cream for it, but that was just as well, as it was very rich to say the least. Definitely reduce the amount of butter next time. And probably just do half a panettone. Otherwise, it was very tasty and some strength of character was needed not to take seconds.

Now since I have so much of it, I'll try to freeze some, to see how it'll cope with that.

Update 6th December 2013:
Going through my paper recipes in preparation for our Christmas Dinner, I notice that I haven't included the recipe, so here goes.

Posted by Caramella Mou at 7:25 pm