About 3 weeks ago, I managed to sprain my ankle and have been almost entirely housebound since. Very annoying as I had the days before Easter off in order to do some serious gardening. One thing I did do yesterday was to very carefully make my way up the garden to the rhubarb patch to harvest them, as they have gone rather large once more and I think in fact we have a record on the thickness of the stems this year. I pulled out the thickest ones, and left the really thin ones to hopefully grow fatter in the coming weeks.

But what to do with them? There are still bags of last year's harvest in the freezer. Then I remembered that my good friend Dr Cutie makes rhubarb cordial, which is extremely popular in her family. So a quick search on the internet gave a few relatively easy recipes and I opted for the one that had the highest reader rating. The original is here (in Swedish). Otherwise they all followed the same principle, the difference was in the quantities of each ingredient. 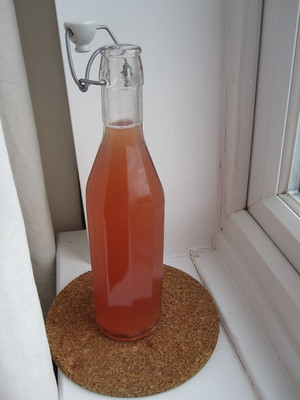 From the comments under the recipe, dilute 1/6 or 1/7. I had 1.1 kg of rhubarb this time, so I increased the amount of water for boiling to correspond. After draining the stalks, I ended up with 9 dl of juice, so the amount of sugar I used was 3.6 dl, again in proportion to the given amounts. This filled up 2 half-litre bottles. 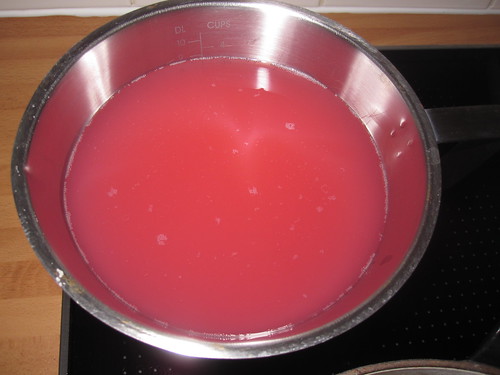 I also didn't have the heart to throw away the remaining stalks, but scraped off as much as I could from the cheese cloths and put in a plastic bag in the freezer, this came to 360 g and will be used as cake filling.

Posted by Caramella Mou at 5:19 pm