The Creamiest Ice Cream Ever

Yes indeed, I once again fell under the hypnotic power of YouTube and came across this video. As I watched it the first time, I thought what a load of nonsense, ice cream without an ice cream machine. Ridiculous! 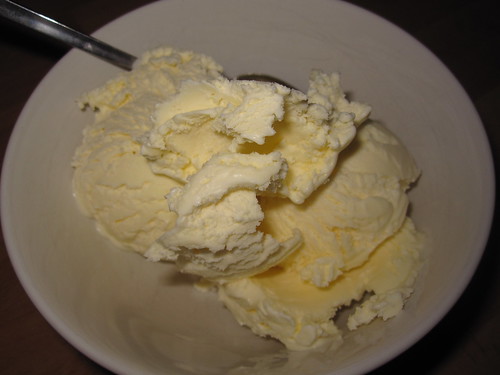 And yet, something compelled me to watch it again and then go and get the two ingredients required - cream and condensed milk. And last night in a burst of energy I went ahead and made it. I didn't follow the amounts listed in the recipe and the condensed milk is the weird 397 g because that's what it said on the can, I've no idea why the manufacturer thought this is a good idea. 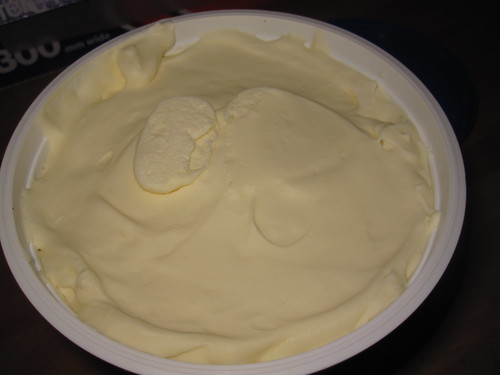 That's all and because of all the fat in the cream and the sugar in the condensed milk, this mixture doesn't freeze rock solid, but can be scooped, especially if you take it out for a few minutes from the freezer first. It also doesn't form any perceivable crystals, the texture looks and feels like regular ice cream, though a bit on the luxurious and dense/heavy side. There really is no need for stirring every hour.

But one small scoop is enough and Lundulph commented that it tastes like really fancy clotted/dairy cream ice cream. And so I've given him the task to come up with interesting flavourings, because the above is the basic recipe, from here on, one can create a lot more advanced stuff.

One thing I'll try next time is to use whipping cream, which has a lower fat content and I suspect will whip better with more air in. I'd also like to add loads of toasted chopped hazelnuts, I think they would work really well. Given how sweet the basic mixture is, I think that any additional flavourings should not be sweet as well. For example, I have a jar full of Daim sprinkles, which are really nice on an ice cream, but they are caramel droplets covered in sweet milk chocolate, so adding them to this ice cream would be a massive overkill. I think puffed rice coated in dark semisweet chocolate might give a similar crunch.

But not just this, as is often the case with YouTube, when a video ends, you get a load of recommendation of other similar things and I'll be spending a few more hours still while going through all of them.

Update 2020-05-13:
Now that we're in lockdown and we've had a heat wave during April, I decided to make this ice cream once again, so that we have something nice to round off our meals. So far I've made 3 batches:

Batch 1: Add 2 dl of rhubarb purée to the basic recipe, but use whipping cream instead of double cream. It tastes lovely. I poured it into ice lolly moulds, sadly the ones I have are of very poor quality and I wasn't able to get the lollies out. The reason is that the lids have built-in sticks, but these are too short to provide the necessary hold to the ice cream in order to get it out. I'll need to try and get hold of some wooden ones, because the moulds are the perfect size for "afters" (Lundulph's term). I suspect this will result in more than 1 litre of ice cream, I haven't measured my ice lolly moulds.

Batch 2: Place a double layer of clean cheese cloth in a bowl and infuse 300 ml of whipping cream with 50 g of Earl Grey tea overnight in the fridge. The next day, gently heat up the infusion and squeeze out as much as possible of the cream. I managed to get some around 225 ml, which I topped up with more whipping cream, then followed the recipe above. Quite tasty, but also intensive, so should be combined with a chocolate and/or hazelnut ice cream.

Batch 3:Add 1 dl of blueberry jam and 1 dl of frozen blueberries to the basic recipe, again using whipping cream. Stir through a little, but not fully, to create a ripple effect. This resulted in more than a litre of ice cream and I wasn't able to put the lid on the tub, so had to cover it with cling film. I did use my Kitchen Assistent to whip the cream and I added the condensed milk from the beginning, which worked absolutely fine. I'm also thinking that I should perhaps go back to double cream, as these three batches have frozen a bit more solid than I remember.

I also had some info from my dear friend Dr Cutie, who made this recipe with a goosberry compote of hers. The result was that it was also very tasty with the gooseberry sourness and the crunch from the seeds combining very nicely with the sweetness of the condensed milk. She also said they'd eaten the whole lot over the week-end. Sadly, we're now down to only one gooseberry bush and I've only seen a couple of fruits on it this year. I'll need to try and nurse it back to health and size, but it is very old, so might not be possible.

Update 2020-06-03:
Batch 4: 2 dl "white hot chocolate". This is a curiosity I bought from Whittard on a trip to London with my sister a couple of years back. I'm guessing it's powdered cocoa butter and sugar and I was looking to use it up. It had all lumped together, so I had to scrape it out of the jar and sift it a couple of times. I wasn't too impressed by this, but it seems Lundulph quite liked it.

Batch 5: 2 dl mashed fresh raspberries and 2 tbsp liquorice powder resulted in a heavenly combination, though the liquorice was very subtle, so possibly up the amount to 3 tbsp. I've also gone back to double cream, but the amount of fresh raspberries made the ice cream go a bit more solid than the bare bones recipe. Lundulph didn't like this one though.

Batch 6: 100 g toasted coconut flakes. This seems to be quite a lot, but I think this is the nicest one yet. Though Lundulph thought the flakes were too large and gave the whole thing a too chewy texture, so I'll try the finely grated coconut that my local supermarket has started selling recently. It's definitely worth toasting it before using.