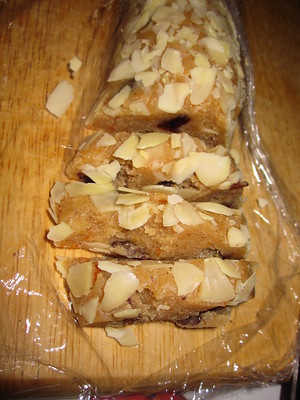 Among the recipes my Mum has given me, there were a few under the theme "quick Christmas sweets" and one just seemed too appealing not to try out at the earliest opportunity.

It's a Swedish recipe for "mandelrulle", which translates to almond roll. Very good for using up left-over marzipan.

The marzipan I used was 38% almonds and fairly soft even out of the fridge. The orange zest was quite juicy, so I should have squeezed it out a little before stirring in. But I didn't and so the mixture was rather sticky and it took me a long time to shape into a sausage. I also halved the amount of cloves on my Mum's request and this was a good thing, because it was quite strong.

We had a little taste of this and it was yummy, but very, very sweet and even after a couple of hours in the fridge, it hadn't hardened much and went flat when I tried to slice it. I think using a marzipan with a higher percentage almonds might work better. I really liked it and there's room to experiment with the spices. Lundulph said all this was unnecessary and eating the marzipan as it comes is quite enough, but then he does like marzipan. In fact he went to the point of saying that it was a waste of good marzipan. I disagree and Lundulph didn't say no to a piece either.

Of course the mixture can be shaped differently, it just occurred to me that I could use my meatball maker, which I used with such success for making cake pops. Wrapped in nice paper, they would make a nice gift. Well, there's plenty of it to eat now...