Toad In The Hole

During my shopping round last Friday, they had a special offer on sausages and I got a couple of packets. Generally I freeze them, just as I do with Swedish meatballs, as they all make very nice emergency dinners, when I've not had time or inspiration for something new. But I thought with Bank Holiday week-end coming up, I should treat Lundulph to a Toad in the Hole. 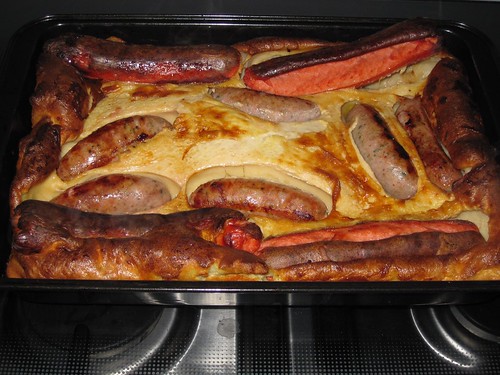 I've never made this before, but I know Lundulph has mentioned it on occasion, so I also grabbed a packet of eggs.

This morning I set to investigate recipes, but having had some massive trouble with my new Linux installation and localisation issues that could not be removed (leaving parts of the computer in English, part in Swedish and part in Bulgarian), I didn't have sufficient time to focus on recipes, so I went to DinnerDiary to see if they'd already made this.

Indeed they had, twice even and the second time, Kerri had kindly posted the recipe. I didn't have Madeira for the gravy, so went with Bisto granules, which is reliable and something I always have in the larder. I also had a packet of jumbo Frankfurters for myself, since I don't like regular English sausages.

The batter was surprisingly thin, but this is correct, it will puff up really nicely and crisp up.

As for dinner tonight, well, we'll have the remaining asparagus - the fattest spears that are left.

Update 2020-03-15:
Once again, Lundulph had started dropping hints about toad in the hole, so I decided to use up a piece of Falukorv I had kicking about in the freezer. Now this was just a small piece, so I decided to make small toads in the holes (is that the plural?) in the muffin tin instead. This only used up half of the batter and as I cut the Falukorv too thickly, I only had 11 pieces for the 12 hole tin.

I also discovered that Lundulph had used up all the beef gravy, so we had to have chicken gravy - this worked just as well. I managed to confuse myself with tsp and tbsp and made way too much gravy, but with the spare batter, I'll be making Yorkshire puddings for lunch, to go with various other leftovers.

The main thing was that Lundulph was well pleased and his eyes sparkled.