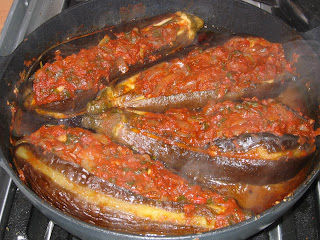 This turned out rather nice, despite all the mishaps I had with it. Once again I followed Rick Stein's recipe.

First of all, making the aubergines stripey - I have a tool for making stripes in fruit and vegetables, but it turned out hard work. I tried Rick Stein's recommendation to use a potato peeler, but that was almost as tricky. I also tried using a vegetable knife, but it was difficult to control. I ended up using the veggie knife to score the aubergine vertically, then followed along with the stripe tool. Not sure if that was easier, but by this point I ran out of aubergines to stripe.

Next I only cut them lengthwise, pried them open and spread some salt and left to drain, wondering how on earth I was going to get the stuffing in. Turns out I'd mis-read, I was supposed to cut out a wedge.

While the aubergines were draining I made the filling. When it was time to add the tomatoes, I found out that I didn't have any. Gah! But I had a small can of tomato puree, which I put in with some water.

Before attempting to stuff the aubergines, I cut out wedges and just about managed to fit in the filling. As with the lamb mince breads, the proportions weren't right, good thing I used two large onions instead of medium sized ones. I also squashed two fingers on the garlic press, which broke. Luckily I had a spare one.

Finally, out of the 6 aubergines, I could only fit 4 in my pan, so decided to bake the last two, which is what my Mum does with Imam Bayildi (or имам баялда in Bulgarian). The 4 in the pan were done in just under an hour, while the 2 in the oven I left for about an hour and a half.

I also drizzled the recommended amount of olive oil, by some strange coincidence, the aubergines didn't seem to soak it all up.

Mu Mum also slices the aubergines and fries them lightly with very little oil, before lining an oven proof dish. So a lot less oil, a lot healthier.

The whole thing was a bit of a hassle, but was quite tasty and I suspect it'd be even nicer with real tomatoes.

Lundulph and I had one each yesterday. I hadn't prepared anything to go with this dish, and I kept thinking that some potatoes or some butter beans might be nice with it.

Tonight, I baked salmon in aluminium foil and I covered it with some of the pepper paste I made on Saturday. That worked ever so nicely, the salmon took some of the heat off the pepper paste. With that we had steamed baby potatoes and half a stuffed aubergine - a very nice dinner for a working day.

But I'll try my Mum's version next time, this stuffing of aubergines takes too much effort, so I'll only do it for dinner parties.

Lundulph's verdict is that it works as a side with meat, or as a main dish for a vegetarian. I think I concur.
Posted by Caramella Mou at 21:45