This is a traditional Bulgarian method of preserving vegetables for the Winter. Pickle in Bulgarian is "turshiya". This particular variety is called "tsarska" which means royal. It's super easy to make and is particularly tasty with the Bulgarian national brandy called "rakia". 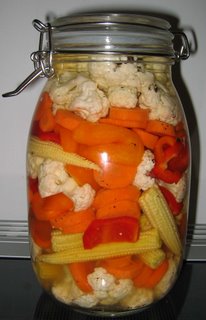 Method
This is a very tasty snack or a good nibble with rakia. Because the vegetables are not cooked, they remain crunchy.

Lundulph (and my Dad, I found out) is very partial to the cauliflower, so this year, I'm making one large jar with only cauliflower. Also he suggested I put some baby corn in as well. The reason I made the turshiya last year was because I had some left over green tomatoes that I didn't want to throw away, so if you grow your own tomatoes, this is a nice way to use them.
Generally I skip the celery, as I don't like it, but will try some next time.

Update 2nd December 2006:
The turshiya is ready, we've had some with rakia we bought last Summer. The baby corn worked very well and tasted very nice. Also, because I put together the juices from the cauliflower bowl and the mixed vegetable bowl when I cooked it with the spices, the cauliflower from both jars tastes the same.

The rakia was interesting - we visited a monastery in the town where we were staying and there was a strange man selling wine and rakia with monastery labels. We bought a bottle, and this is the one we tried today, surprisingly tasty. It has a twig of what I think is lavender and it tastes very flowery. Neither of us is blind yet.

Update 6th December 2013:
Going through my paper recipes, I notice that I've jotted down a couple of things on the paper version of this blog entry.
One kilogram of vegetables gives approximately 2 dl of liquid. It also fits nicely into two 1 litre jars. To top-up, use 2.5 dl of cider vinegar and 2.5 dl of water.

Top Tip
Make sure you have good ventilation when doing this otherwise boiling the Cider Vinegar will stink out the whole house and you will have to put up with your family moaning about it for the rest of the evening.