Yesterday it was time to finally put my original idea into practice - a whole batch of my regular müsli apart from the porridge oats, which were made into porridge with milk. I used 1.5 pi of porridge oats to 2 pi of semi-skimmed milk and boiled stirring on low heat. I also added 2 heaped tablespoons honey.

Once the porridge was ready, I added the müsli mixture and stirred it in as well as I could, which was difficult. This filled up my big pressure cooker pot quite nicely.

As the dry ingredients tried to suck up whatever available moisture there was, the whole thing went quite stiff.

I put most of it in one of the deep baking pans and again put the second one on top and weighed it down. What was left, I distributed over two muffin tins, again trying to compress the mixture. After about an hour, I removed the weights from the baking pan and left it together with the muffin pans to cool down overnight, covered with kitchen paper. 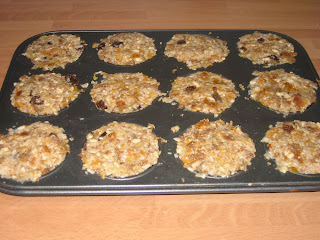 This morning I was almost late for work, as I had to cut up the big slab. It was still fairly moist and spongy to the touch. I cut it up and put it in my big cake tin, on layers of baking paper. The muffin shapes needed to be poked out, but came out in one piece. Lundulph took two pieces with him to work and said they were good. But since I made a whole batch of müsli, these should last him a couple of weeks and a worry is how this will work, if at all. Especially the milk is bound to go off. So after an e-mail discussion, we decided to bake this lot on low, just like meringues. Sadly I forgot to get this started when I got home, so there are some left to do tomorrow.

When I checked them half an hour ago, the pieces had definitely a dried feel to them. At that point they'd been in the oven for just over an hour.

Hopefully this will be the one good recipe.

Update 12 March: I had a bite of this version and frankly it didn't taste too nice, almost like eating bran flakes out of the box. But it's definitely the healthiest version.

Update 14 March: I've frozen most of this version of the müsli bars and a good thing too, Lundulph says that the ones he had this morning left a bit of an odd aftertaste. We're guessing that the milk in the porridge is going off.
Posted by Caramella Mou at 9:29 pm