This is a hearty soup that I learned from a former colleague and a friend. I've mentioned it earlier. It's fairly quick to make and is great for cold evenings. 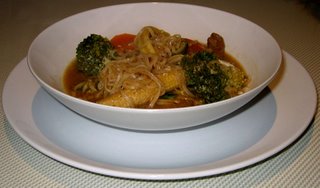 Method
It would be good with other ingredients as well I think, like bamboo shoots, mushrooms, pak choi.
Posted by Caramella Mou at 8:04 pm