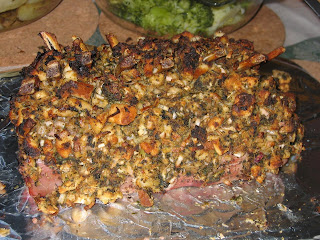 Yesterday we had Lundulph's parents over for the day and spent most of it Christmas shopping. Lundulph's Dad and Lundulph himself like lamb a lot, so I thought I'd make a roast. But then I came across this recipe from Waitrose and it just looked too delicious to ignore.

I've also started going to our local butcher's, which is very exciting, so got the lamb rack from there - I asked for one of 600 g as per the recipe, and the butcher did comply, I explained how I was planing to cook it and he started preparing it, confirming that what I wanted was a French cut. He also cut the rack in two and put it so the ribs crossed and tied it with a string and said I could put some filling inbetween. But the rack was rather small - 7 ribs all in all. So I still bought another two from Waitrose - theirs are a lot smaller and all fat was trimmed off. They also cost more than twice as much as the rack from the butcher's.

So I doubled the crumb mixture also was in a bit of a rush and didn't get it mixed through very well. I covered all the lamb racks and left in the fridge while we were at the shops. That was also "chef's tip" on the recipe card.

Finally the timings for roasting were not right the recipe said 35 - 45 minutes and the Waitrose rack packets said 15 - 25 minutes. I started with the butcher's rack first as it was bigger and roasted it for 15 minutes, then put in the Waitrose racks as well and roasted for another 20 minutes. I checked with a thermometer - the racks had reached 55 degrees C. I left them in for another 15 minutes, then switched off the oven while we were having our starter.

Still when I served the lamb, the chops were nicely pink. Throughout the roasting, there were the most wonderful smells coming out from the kitchen. And despite that the crust hadn't been mixed up well, it was ever so tasty.

Along with the lamb I made rosemary and garlic potato wedges, which also went down a treat.

I used waxy salad potatoes and cut in wedges. Then I steamed them for about 7 minutes. In the mean time, I poured grapeseed oil in a pan and pressed three cloves of garlic into it and also chopped some fresh rosemary and mixed in. When the potatoes were done, I transferred them carefully into the pan and stirred them in to get them coated with the oil, then baked for 40 minutes, stirring a bit half way through. I left them in the oven while the lamb was roasting.

For greens I steamed some broccoli.

During carving, though, the crust fell off, sadly. Not sure how they did it on the recipe photo. 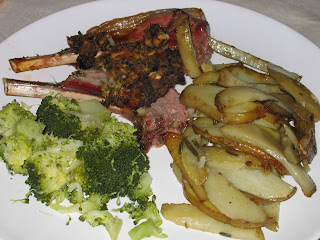 Posted by Caramella Mou at 8:57 am