Ever since Lundulph and I moved together, we've had a different bird for our romantic Christmas dinner for two.

Our first Christmas we had goose as per old English tradition. I bought a frozen one, it cost £20. Thawed it and followed Delia Smith's recipe, despite the gut feeling we both had that it wouldn't work - even after I'd managed to hunt down the Armagnac that was required. I made Lundulph do the actual stuffing, it seemed too iffy for me. We didn't tie the goose either - it stretched out in the oven and we struggled to get it out in the end. And from the rather big bird that we put in, what came out was more of a pigeon size - during the roasting we'd gathered up about 2.5 pints of goose fat.

Don't remember much of what goose flesh tastes like. But the stuffing was a traumatic experience and since then I have severe doubts about Delia's capabilities as a cook. The only good thing that came out of this is discovering that goose fat is the ultimate thing for roast potatoes. Luckily Sainsbury's sell that in cans and I buy one every year for Christmas. And it's picking up in popularity too, it's easier to find these days.

Over the years, we've had turkey as is tradition today, chicken and guinea fowl last year. And so I present the bird of 2007:

Pheasant
This is what we settled on last minute two weeks ago, after discussing other game birds and their status in the UK in terms of how threatened they are. It's also from my new thing of going to the butcher's. And it seems that pheasant is en vogue this year, they had loads. I also ordered a cured uncooked ham for Christmas Day.

A quick search on pheasant recipes of the roasted type didn't result in anything inspiring, so I defaulted to look at Delia's website, where two recipes seemed interesting - "roast pheasant with chestnut stuffing and port and chestnut sauce" and "pheasant roasted in butter muslin". I couldn't decide on which of the two, so picked bits from both and invented as I went along. 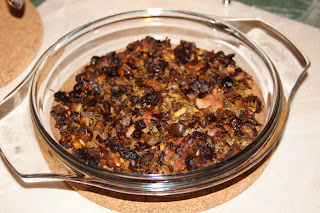 For the roast potatoes, I peeled and cut the potatoes in chunks, as they were quite big. Then I boiled them for 7-8 minutes, drained the water, and shook them around in the pot with the lid on. This rips up the surface of the potatoes and is the bit that'll soak up fat and become crispy, so it's a vital step. I put a deep roasting tin onto the hob (make sure it can take it!) and poured out most of the goose fat of the tin and heated up. Once it was hot, I transferred the potatoes to the tin and rolled them around to get them coated with fat, then put on the top shelf of my combined grill and oven. I've never had good experiences using it as an oven before, but on maximum 8 it did the trick. I took out the potatoes a couple of times during the roasting and basted with the goose fat and also turned them around a bit. 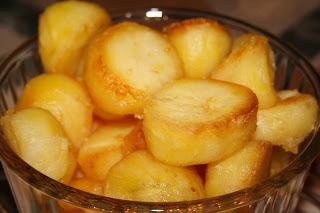 In addition I also steamed Chantenay carrots and broccoli. 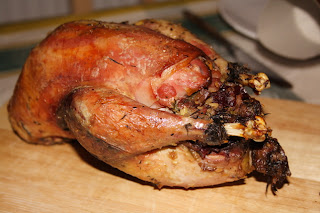 All in all, I must say, it turned out rather well, the pheasant was very tasty, not at all extreme in any way, so I'm guessing it was a young bird. It wasn't dry either, thanks to all the bacon and the roasting bag. The cranberries were a bit too sweet, especially combined with the sweet Madeira sauce, but the flavours mixed rather well together.

As accompaniment we had a Californian Zinfandel from 2005, which worked quite nicely.

Due to all other things we still had to do, and general lack of imagination, I bought a ready made chilled dessert, which was very nice - some sort of chocolate pudding with gooey chocolate sauce and it came in small ceramic ramekins. I microwaved them to get the sauce bubbly and served with clotted cream ice cream. Yummy!

Lundulph was so hungry, he tucked in before taking a photo. 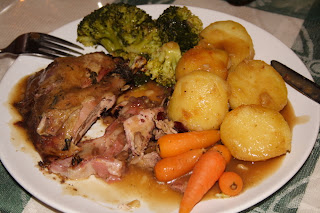 Right, now back to the kitchen to mix up some dough for the gingerbread house, that's tomorrow's project and this year the nieces have selected a new and complicated design.
Posted by Caramella Mou at 6:55 pm