Today Lundulph had a very hard day. We knew it both in advance and I decided to give him a treat and make a new dish from my Thai cook book. This is indeed a beautiful cookbook, the photos are brilliant and even to a person like me that doesn't eat seafood, the seafood dishes look nice. Unfortunately it is an American book and all recipes are given with American measures. In addition, I think they have seriously underestimated some amounts, not to mention cooking times. The translation into metric leaves a lot to be desired too. So I end up correcting it and I don't really like to do that the first time I follow a recipe. My Mum can just read a recipe and know what's wrong with it, but I haven't mastered that knack yet. Well, excluding Thai fish sauce, Nam Pla (that sounds like Klingon, hi, hi). The book is very generous with it, I think the number of tablespoons of fish sauce should be halved and the unit should be teaspoons. Then it's just right.

Anyway, enough rambling. Today's recipe is called Guay Teow Raad Naa and is translated as Wide Noodles with Cream Sauce. And below are the measurements I used, not entirely according to the recipe.

Given my mishaps over the last week, I had very low hopes for this, it didn't look anything like the picture in the cookbook, but boy, was it tasty! So I did managed to treat Lundulph to a nice dinner. Will try to get a photo up tomorrow, we were just too hungry to bother with that today.

28.10.2007 update:
Here is what it looked like, not too esthetically pleasing, but very tasty indeed. 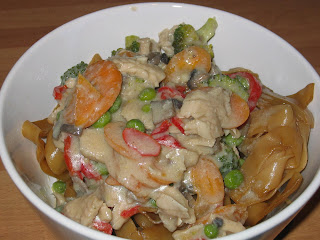 Posted by Caramella Mou at 9:46 pm