The other week, I braved the crowds of Italian and Japanese tourists in Covent Garden and went to the market there. Rumour had it it did late nights in August, so that had to be checked out. I was a bit disappointed, despite not being really sure what to expect, but there was a French stand that had dried sausages and I just couldn't resist - wild boar, venison, garlic and choritzo - so to be on the safe side, I got one of each and parted with a substantial amoun of money. And we've been nibbling away at the venison one for a few days, but very little at a time, as it was very greasy. So I'd decided to cook the others or they'd go out of date.

So I made kavarma (stress on the last of the a's). Or "Каварма" in Bulgarian. And in the way they do it in Koprivshtitza (Копривщица), according to wikipedia. Basically it's a gyuvetch - but with salami. And the Koprivshtitza style is to crack an egg on top. 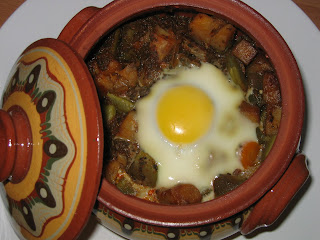 What I did:
Well, it was rather tasty, could have done with a bit more sausage, but I wanted to save the choritzo for a pizza later on in the week. Also should probably only have baked for about 5 - 6 minutes after adding the egg, it went a bit hard, would have been nice to have the gooey yolk.
Posted by Caramella Mou at 12:52 am